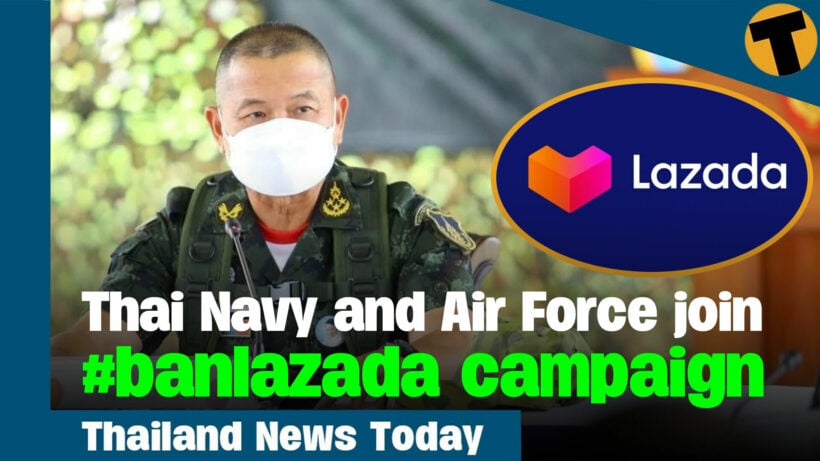 Following yesterday’s report that Lazada was banned from entering Royal Thai Army bases, now the Royal Thai Navy and Air Force have also joined the boycott, stating that a zero-tolerance policy “will be considered” as they claim Lazada ads “could drag Thai society down”.

The boycotting of Lazada has emerged from an ad campaign launched last week on TikTok, which has been construed as possibly offensive to the Thai Royal Family and disabled people using a wheelchair. One of HM King Vachiralongkorn’s sisters, HRH Princess Chulabhorn, uses a wheelchair and suffers from lupus, an autoimmune disease.

The issue continues to be a hot topic among Thais after a week of ‘outrage’ from leading royalists. Many users have even deleted their Lazada apps in protest and response to the #banlazada trending hashtag. Some online sellers have temporarily closed their Lazada shops on the platform too.

The issue was ramped up after the Royal Thai Army announced they would ban Lazada delivery services in army areas and bases, even setting up temporary Lazada delivery tents out the front of key bases around the country. Yesterday, Thai media reported that the Commander-in-Chief of the Royal Thai Army, ณรงค์พันธ์ จิตต์แก้วแท้, said soldiers could still buy products from the application but had to take delivery outside the military area.

But then, last night, the Commander said that every unit related to the Royal Thai army is “not allowed to use the services from the platform, and if anyone fails to follow the rule, the penalties will go to the unit commanders.”

And joining the campaign of outrage, the Royal Thai Navy and Air Force announced their extended boycott of Lazada and asked for cooperation from both officers and residents to avoid using the platform.

The Thai Royal Navy Spokesperson reiterated the claims that the advertisement aimed to “insult the disabled groups”, which was unacceptable in Thai society as it could “drag Thailand down”.

Meanwhile, the Royal Thai Airforce spokesperson said the department would like to ask for cooperation from officers to consider carefully before ordering products from Lazada quote “because the platform produced advertisements that insulted others and affected Thai society”.

Thai health officials are on high alert after at least 1 foreign national was found to be infected with an Omicron sub-variant that has the potential to cause severe illness.

The Bangkok Post reports that Supakit Sirilak from the Department of Medical Sciences says the World Health Organisation has issued a warning about 3 highly infectious Omicron sub-variants, known as BA.4, BA.5, and BA.2.12.1.

According to Supakit, over 97% of Covid infections in Thailand are currently the BA.2 sub-variant. However, officials are paying heed to the WHO’s warning. BA.4 and BA.5 were first reported in South Africa in January and February, with BA.2.12.1 detected in the US in February. Since then, there have been confirmed reports of BA.4 and BA.5 spreading in several countries, including Botswana, South Africa, Germany, and Denmark. Meanwhile, the new BA.2.12.1 has also been found in Canada and India.

Whole-genome sequencing in Thailand shows that a Brazilian national was infected with BA.5, while an Indian national and a Canadian were carrying BA.2.12. To date, there have been no reports of the BA.2.12.1 and BA.4 sub-variants in the kingdom.

Supakit goes on to say that people who contract BA.1 display weak immunity against BA.4 and BA.5, but those who are fully vaccinated show stronger immunity against both sub-variants. He adds that health officials around the country will continue to monitor Covid infections to check for any of the 3 sub-variants.

Thailand’s Public Health Minister says he will offer households a million cannabis plants for free from next month. After reporting on the two previous stories, I think I’d like some of that too.

Anutin Charnvirakul’s generous gesture is to mark June 9, from when people will be legally permitted to grow cannabis plants in their own homes.

However, it will have to be medical-grade cannabis only and can only be used for medicinal purposes. According to a Nation Thailand report, there will be no official registration required to grow the plant at home.

Yesterday, Anutin took to Facebook to confirm his 1 million plant giveaway. He also explained that Thai companies registered to do so can sell cannabis products that have less than 0.2% THC, which is the part of the plant responsible for getting people high. The health minister says people can also operate cannabis-related businesses under relaxed rules.

“This will enable people and the government to generate more than 10 billion baht (per year) in revenue from cannabis and hemp. Meanwhile, people can showcase their cannabis and hemp-related products and sell their products nationwide.”

Anutin adds that small sellers of marijuana products are not required to register with Thailand’s Food and Drug Administration, although bigger businesses must obtain FDA permission to operate.

According to the Nation Thailand report, supporters of the relaxed law hope it could help revive the economy following the pandemic. In 2018, Thailand became the first Southeast Asian country to legalise medical marijuana.

Thailand’s Labour Minister says the government is considering increasing the daily minimum wage to 492 baht, an increase of over 150 baht.

สุชาติ ชมกลิ่น revealed that the ministry has discussed the raise with representatives of workers’ unions and businesses based on the rate submitted by the minimum wage sub-committee in each province. The highest rate submitted has been 492 baht per day, but this is for specific provinces and is not yet final.

According to Suchart, his ministry will need to take into account a number of factors before determining the new daily minimum wage rate such as the cost of living, inflation, and the economic status of employers in each area, to minimise the impact on related parties.

Suchart says he expects the new rate, as well as the provinces where it will take effect, to be confirmed by September.

There has not been an increase to the daily minimum wage rate since December 2019, when the rate for unskilled workers rose from 308 – 330 baht to between 313 and 336 baht.

About 300,000 international travellers arrived in Thailand within the first week after the Thailand Pass program was simplified and the Test & Go and Sandbox schemes scrapped on May 1.

After removing the Test & Go and Sandbox programs at the start of the month, fully vaccinated visitors don’t need to take any PCR tests either pre-travel or on-arrival. However, unvaccinated or under-vaccinated travellers, who either prefer not to take or are unable to take, a pre-travel PCR test 72 hours before their inbound flight will be required to quarantine for 5 days.

Everyone entering Thailand at the moment, Thais and foreigners, are still required to apply for the much-debated Thailand Pass online ‘gateway’. It remains a procedural barrier for the tourism sector and seen as one of the final obstacles to Thailand’s fully reopening to tourists.

By the way, the Thailand Pass is FREE to register, so beware of scams that are currently circulating!

Between May and September, the Tourism Authority of Thailand predicts that there will be 300,000 people visiting Thailand each month, so May has already had a nice kickstart, according to the published numbers. From October to December, the number is projected to jump to 1 million people per month as Thailand shifts to the annual high season.

Pre Covid travel numbers in 2019 averaged 3.3 million travellers arriving in Thailand each month, so the projection of 300,000 per month is still fewer than 10% of the international arrivals pre-2020.

With an increase in international travellers coming to Thailand, hotels and tourism companies are being urged to re-train their employees to be multi-skilled, and improve their facilities.