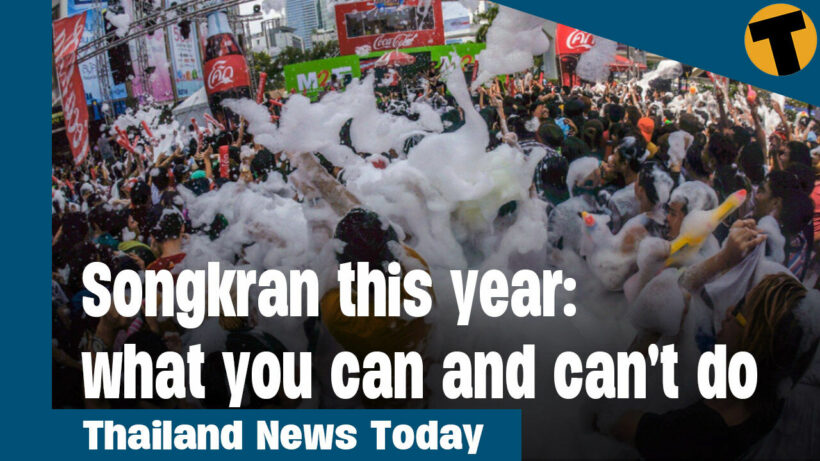 no foam parties or powder smearing will be allowed in Bangkok during Songkran next month, but when it comes to water splashing on the Thai New Year the rules are a bit vague.

Quote unquote “Traditional water sprinkling” is allowed, but officials did not go into detail about what exactly that means.

The Bangkok Communicable Disease Committee decided to allow “water sprinkling” in specific areas that have sought permission, and organisers must abide by “Covid Free Setting” measures set by the CCSA which include the typical social distancing, mask-wearing, and teetotaling.

The committee met yesterday to discuss petitions from local businesses to allow Songkran parties to be held in popular tourist areas like Khao San Road. At the meeting, the Bangkok Metropolitan Authority decided to permit “traditional water sprinkling” activities within a “Covid Free Setting.” Water splashing in public areas and roads is prohibited.

If a Songkran event is expected to exceed a thousand people, the organiser must obtain permission from the BMA’s Health Department.

So far, the administration has received no more than eight requests from private firms and temples seeking permission to hold Songkran activities on their private grounds. Meanwhile, 46 out of Bangkok’s 50 district offices had declared they wouldn’t hold Songkran celebrations, and the other four district offices have not yet announced their decision.

Earlier, the CCSA had agreed that water splashing and traditional water pouring as a blessing would be allowed at organised events — as long as there is no alcohol and events are under “Covid Free Setting” measures. Water splashing is not allowed on public areas, like roads.

And so on Thursday, business owners in Bangkok’s popular walking street, Khao San Road, teamed up with tourism professionals from Pattaya, Phuket and Chiang Mai to draft and submit a joint petition urging the CCSA to repent of its party foul, fearing a loss of income.

The group has proposed a list of measures for screening and limiting Songkran party participants, according to the president of the association.

Bangkok’s communicable disease committee then met on the following Monday to consider their request and announced their decision yesterday that the vague “traditional water sprinkling” was allowed.

The CCSA’s current restrictions also encourage festival observers to practice traditional activities without water, such as bowing to elders at a distance of at least a metre, instead of pouring water on their hands as a sign of respect and blessing.

The guidelines, though well-meaning, may be seen by many as failing to take into account the elderly’s desire to be blessed and honoured by their younger relatives, while also reflecting logical fallacies about the spread of Covid-19 among family members.

In response to complaints about a shortage of antiviral medicine Favipiravir, the Public Health Ministry has said that the country’s supply is enough to meet the local demand, which does not explain why there are complaints in the first place.

Public Health Deputy Permanent Secretary Thongchai says hospitals may experience a “temporary” shortage with the uptick in Covid, but the official says they can acquire more of the antiviral pills from the provincial health office in their area.

The antiviral medication is used to treat Covid-19 patients with moderate to severe symptoms but needs to be administered at the early stages of the illness. With hospitals running low on the drug, the Rural Doctors Society has been urging the ministry to be more transparent about the country’s supply of Favirpiravir, but many officials have denied a shortage….despite there actually being a shortage.

Out of the just over 128 million tablets of Favipiravir recently procured by the Government Pharmaceutical Organisation, most have been distributed to hospitals across the country, leaving a total of 22.8 million pills in stock, according to the public health official, quoted by Thai PBS.
also requesting the procurement of an
The ministry ordered 75 million Favipriavir pills before Songkran as coronavirus cases are expected to rise after the holiday, according to Nation Thailand.

The Thai government is looking into allowing citizens to produce alcohol at home, but the spirits would only be allowed for personal consumption and not for sale.

The revised laws will likely allow Thais to brew beer as well as distill whiskey, which is often brewed with herbs to make the traditional and homemade moonshine “ya dong.”

The deputy government spokesperson, Ratchada Thanadirek, says the Cabinet has been considering a draft law under the Excise Tax Act that was proposed by MP Pipop from the Move Forward Party. Under the Cabinet’s approval, the Finance Ministry will work on revising the regulations for producing booze at home.

Ratchada added that while the loosening of laws on homemade alcohol is intended to give more freedom to the public, the alcohol-producing process will need to be controlled to meet health standards.

He said the cabinet has insisted that the regulations should focus on controlling the quality and safety of beverages and limiting the environmental impact from the manufacturing process. But how the government can realistically enforce this in each and every household remains to be seen.

A group of five foreign tourists alongside two tour operators were white water rafting down a river in Song Phraek village when they crashed into a rock causing their rubber boat to capsize.

Local authorities are still searching for the 42-year-old man from Iran. A villager who witnessed the incident said he saw the five foreign tourists hit strong rapids and crash into a rock causing their boat to capsize near a bridge. The man is presumed to have drowned and the search for his body is still ongoing.

A taxi driver robbed a passenger and left him and his friend at a petrol station in Isaan province Ubon Ratchathani.

The Thai tourist from Bangkok says that not only did the driver overcharge him for the trip, but he also took off with his luggage which included his passport, his tablet, and his phone.

The 45-year-old tourist said that he and his friend had just landed at the Ubon Ratchathani International Airport and were approached by a group offering a taxi service. For a 100-kilometre trip from the airport to the Khemmarat district, the taxi charged 1,000 baht. According to the standard rates for the distance, the transportation fee shouldn’t cost over 900 baht.

The tourist says the driver suggested stopping at a petrol station on Ubon – Trakan Road to go to the toilet and take a quick break. When the tourist and his friend walked out of the convenience store, the taxi was gone. The driver took three items of luggage holding documents, a passport, a tablet, and a phone, which the tourist says cost 100,000 baht. They say they had even bought drinks and snacks for the driver.

The tourist says he usually visited the province to make money about 4 to 5 times per year and had a regular taxi driver. However, the driver wasn’t available, forcing him to use the service at the front of the airport. He wanted the relevant authorities to investigate the taxi service at the airport to prevent similar cases in the future.

The officers from Muang Ubon Ratchathani are now working on the case. They checked the CCTV cameras in front of the convenience store and a car park at the airport to search for the driver.