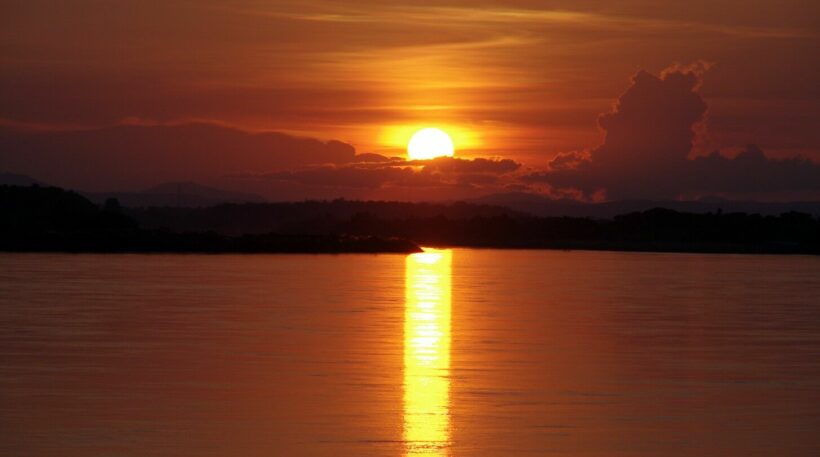 A father and his 7 year old daughter jumped into the Mekong River and drowned yesterday afternoon. The incident happened in the northeastern Thai province of Nakhon Phanom. The working theory is that it was a murder-suicide, says Thai media.

Jamras Srihata, from the Muang Police, says the incident happened around 6:30 pm yesterday in front of the governor’s riverside estate.

The man has been identified as 30 year old Rakangngern Intra. The daughter is 7 year old Kulnart Intra.

A team of rescue workers from the Muang Nakhon Phanom Municipality as well as divers from the Mekong Riverine Unit dashed to the pier the man and his daughter had been seen jumping off of. 2 dogs also assisted in the search. It was not stated who witnessed the father and daughter jump from the bridge.

The rescuers managed to pull out both bodies from the river after searching for about an hour. The bodies were found a short distance from the pier. As the bodies were being taken ashore, the 2 dogs went to their sides.

Rakangngern’s mother, 53 year old Somkid, says her son was married but his wife left him around 2 year ago. She says the wife left Rakangngern with 2 daughters, aged 7 and 4. Somkid adds that her son was about 100,000 baht in debt, something he had complained about. Somkid went on to say that she didn’t think the debt would lead her son to do what he did.

gummy
How terrible if that was true. He may have been so troubled but to take the life of your own children is awfull. RIP to both of them though
HolyCowCm
Love the city as has a some character, but very small and if your back is up against a wall then would be hard to see any light in these times. Take your own life, not another persons life if…

Shane
This is a true tragedy and should never have happened. The covid fall out is now killing families. What a shame this pandemic is turning into. Need to restore south East Asia

Protesters clash with police for over 4 hours in Bangkok, 5 officials injured