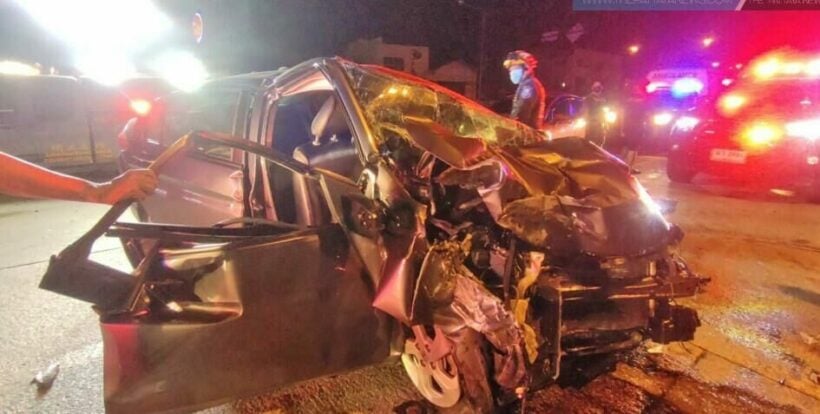 Photo via The Pattaya News.

Early this morning, a woman crashed her car into a trailer truck in Bang Lamung, a district in the Chon Buri province. She is currently in critical condition.

At 1:30 am Bang Lamung police were alerted to the accident that happened in a U-turn on Sukhumvit Road.

When emergency responders got to the scene they found a damaged sedan in the road. The driver of the sedan was 28 year old Kotchaphon Rostasirikun. Emergency responders found her unconscious trapped inside the vehicle. The responders then extracted her from the vehicle and brought her to a local hospital for critical medical care.

Not far from the damaged sedan was a damaged trailer truck. An unhurt 43 year old Sommai Sanam, the driver, was there, anticipating police. He told Bang Lamung police:

I was making a U-turn when the sedan driver who was driving at high speed crashed into the side of my vehicle.

An eyewitness to the accident, 19 year old Natapon Deeprom, has seemingly confirmed this order of events as he told Thai media:

I was driving behind both vehicles involved in the accident. I saw the trailer truck was slowing down to make a U-turn. The sedan did not slow down.

Police are continuing to review local CCTV footage to further confirm the accuracy of the witness’s and Sommai’s statements.

As of this writing, Kotchaphon is in a local hospital in critical condition.