This is for anyone who has ever been knocked down on their ass or had the door slammed in their face.

A calling to anyone who has ever tasted the grit of self doubt and has despised the lingering taste of vulnerability. That EITHER/ OR mentality that chisels courage/compassion or chisels regret/ rejection.

In a Galaxy far, far away was a man who used to race triathlon. Chasing the Ironman dream with shaved legs and lycra.

But that was then….. and this is now.

The ‘now’, for me, has been a three year hiatus off the bike.  Oh sure there have been countless miles pounding the pavement and trails. Ticking off the running miles with buckets of sweat earned on the hills of Phuket. Countless hours in the sea and pool, logging mile after mile churning against the current and rip of mediocracy.

Let’s not forget Newton’s first law of motion: An Object in motion stays in motion.

We also have to remember the law of specificity – You get What you Train For! You can’t transfer credits from hours running and swimming into a free ride on the bike.

How would you respond if you were asked to join a 7 day cycling tour in scenic and breathtaking Chang Mai?

Before you jump the gun and immediately nod your head let’s see what’s awaiting you:

1) 678km of road
2) The toughest and steepest peaks Thailand has to offer
3) Lungs on fire
4) Seared Ahi Tuna Quads
5) Questioning ‘Why The Hell Am I doing This’?

I was offered an absolutely amazing opportunity to join my mate Brian, from Australia on The Mae Hong Son Hills Tour presented by SpiceRoads Cycling. Of course I gave a resounding “YOU BET YOUR ASS!”

You must answer this burning question… Are you willing to pay in grams or tonnes?

You either walk the walk and talk the talk or you DON’T!
Esse Quam Videri – TO BE, RATHER THEN APPEAR TO BE.

I got my ass handed to me on this brutal climb.

I waived my white flag and submitted to this beast.

I pulled the pin! I pushed the stop button!

I opted for the van.

The rider I was riding with told me, once in the safety and serenity of the van, that you gave a ”valiant effort “.
“Absolutely nothing to hang your head about. It was a valiant effort”.

I am responsible for the effort and not the outcome. Sometimes a valiant effort equals a ride in the van as opposed to my entitlement to Happy Ever After.

Turn the van around and go back to the bottom …please? Let’s not forget that you can take the boy out of Canada, but you can’t take the Canada out of the boy (Darren’s from Canada… der!)

It’s taken me nearly 45 years of my life finally to be at a place… “All that you are is welcomed here”. That can only happen once we get very intimate with vulnerability, failure and mistakes.

How can you lean into COURAGE without exposing any FEAR?
Each of the NO’s in my life has brought me closer to my YES.
Success isn’t something you find at the top of a mountain, it’s something you bring! 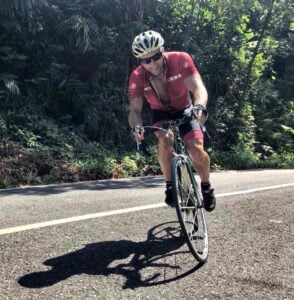