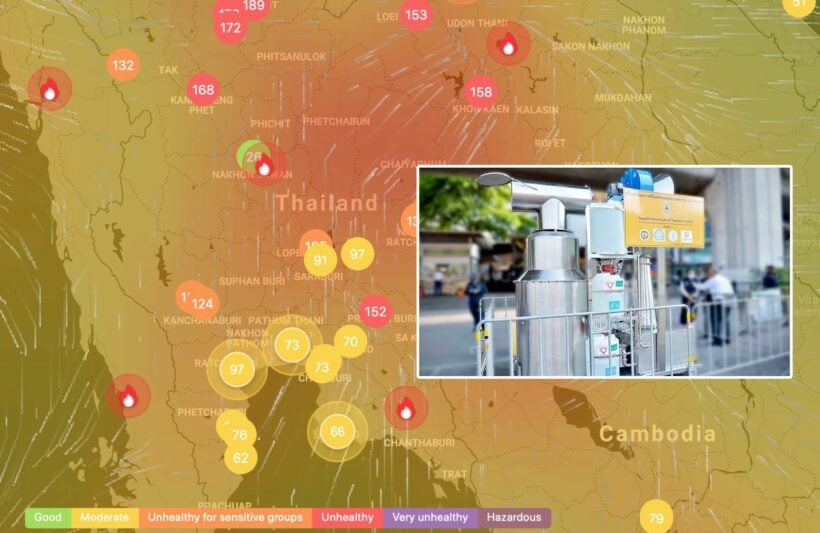 The Nation reports that the Rajaprajanukron Foundation, under Royal Patronage, installed four air- purifiers yesterday around the Victory Monument area in a trial of their effectiveness in filtering out PM2.5 dust particles.

Silpasuay Raweesaengsoon, permanent secretary of the Bangkok Metropolitan Administration says the machines can purify polluted air at the rate of two cubic metres per second.

“Placed in areas with heavy traffics, they help reduce the level of pollution caused by vehicle emissions. The purifiers will be switched on daily from 5am to 12am, and 2pm to 8pm. If the air purifiers prove practical, they will be installed at bus stops, schools, and other busy places.”

The move, whilst audible, will do little to address the acute air pollution problems around the city. Most of the city’s smog comes from the burning off of plantations, mostly around the central Thailand farming regions, but also in the north and north-east. The data from the NASA satellites clearly show active fires in a real-time feed (also note the even more acute problem in Cambodia, whose smoke is also floating across into Thailand)

Meanwhile the AirVisual feed this morning (below) indicates that the respite from severe air pollution today is due to the current southerly airflow out of the Gulf of Thailand. The evidence is clear that the problem in Bangkok is only when the winds are blowing the smoke from the plantation fires in the east and north towards the city. If the problem was the traffic and the factories, then Bangkok would still have poor air this morning, or right throughout the year, which it doesn’t. Bangkok’s air pollution problems are evidentially linked to the time of the year when the farmers light fires in pre or post harvest.

Read our editorial about the denial of Thai authorities to embrace the data and continue focussing their blame on local city factors.

Meanwhile Thailand’s sugar industry is trying to take the lead in encouraging farmers of sugarcane to cur and harvest, rather than burn their sugarcane before harvesting. Read that story HERE.

The southern air stream at the top of the Gulf of Thailand has pushed much of today’s smoke back into central Thailand and the north – AirVisual.com