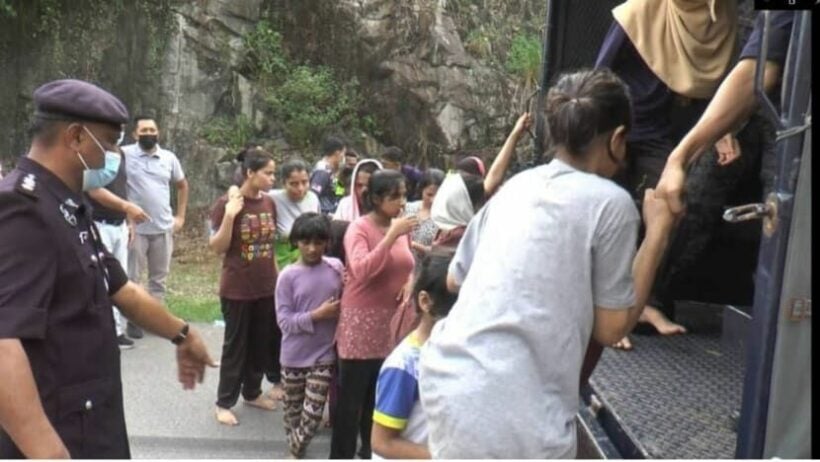 Police guide detained migrant escapees onto a truck to transport them back to an immigration detention facility. Credit: Royal Malaysia Police

Malaysian authorities are still on the hunt for 130 illegal Rohingya migrants, who escaped barefoot from a temporary immigration depot near the Kedah-Penang border on Wednesday, after a riot broke out at the facility early yesterday morning. The refugees were reportedly protesting overcrowding at the facility when the situation escalated into a riot.

The undocumented migrants, still on the run, include at total of 99 men, 21 women and 10 children, according to Kedah police chief Comm Wan Hassan Wan Ahmad. Authorities earlier said that 528 of the 664 Rohingya detainees had fled from the Sungai Bakap temporary detention depot, after a riot broke out at around 4:30am, reportedly due to overcrowding. Later reports refer to the facility as the Sri Impian Immigration depot in Bandar Baharu, Kedah.

Yesterday, 6 of the escaped Rohingya detainees were struck by a car and killed while attempting to cross the southbound side of the North-South Expressway near Jawi. The victims included 2 men, 2 women and 2 children, whose bodies were “thrown all over the highway”, according to the New Straits Times, which quoted a villager who witnessed the accident.

Various agencies in Langkawi had previously detained the Rohingya in operations to round up illegal migrants in the region. According to the police chief, a total of 448 detainees had been relocated to 4 different immigration depots at Langkap in Johor, Machap Umboo in Melaka, Semenyih and Bukit Jalil in Selangor as of midnight Wednesday.

Now police and immigration officials are conducting a manhunt to re-detain the remaining escapees. Penang police chief Mohd Shuhaily Mohd Zain said the barefoot escapees appeared to be moving in large groups, some of which were said to just be “following the crowd”…

“They are moving in large groups and as they are barefooted, I believe they must be tired. After speaking to some of those who have been caught, it has strengthened my assumption that they are moving south but do not have an actual destination in mind.”

According to Malaysian Immigration Department director-general Khairul Dzaimee Daud, a total of 362 escapees had been rounded up as of 10am Thursday.

“They broke out by breaking the block’s doors and grill barriers. The officers on duty activated the standard operating procedures by contacting the Royal Malaysia Police and related agencies for support.”

He admitted that “an element of unhappiness may have existed” at the facility, but declined to give details while the investigation into what caused the riot in underway. Poor living conditions have been reported at such immigration detention centres in Malaysia.

Cambodia reduces quarantine for unvaccinated visitors from 2 weeks to 1