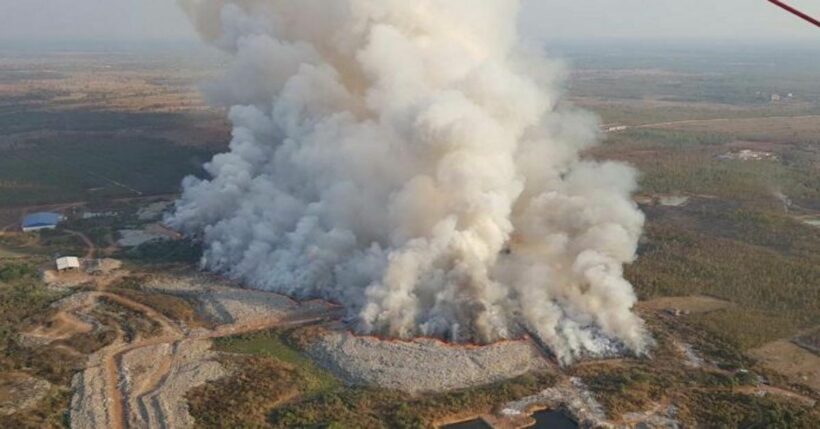 Aerial photo of the fire in Vientiane, Laos. | Photo via Lao Airsports Club.

Clouds of toxic smoke billowed over the Laos capital of Vientiane after a fire broke out at a landfill over the weekend, according to the local media outlet Laotian Times. Authorities have yet to issue a comment about what caused it.

Smoke blanketed the skies in and surrounding the Xaythany District, causing locals to complain about the stink over the weekend. Many individuals have experienced respiratory issues and stinging eyes as a result of the haze.

According to statistics, Vientiane Capital has an air quality index (AQI) of 152, which is classified in the “unhealthy” category, and the dumpsite at KM 32 in the district is filled with a variety of flammable items, making it difficult to control the fire.

Authorities advised residents in the neighbourhood to use face masks to protect themselves from the noxious gases created by the fire, which took several days to entirely extinguish. The last time the dumpsite caught fire was in March 2018, when a cloud of smog covered the city.

Nobodysfriend
Yeah , bury your toxic rubbish in the earth that was once fertile ... Health issues are just one of the consequences of that . No respect for the environment , no will to change their behavior ... what results…