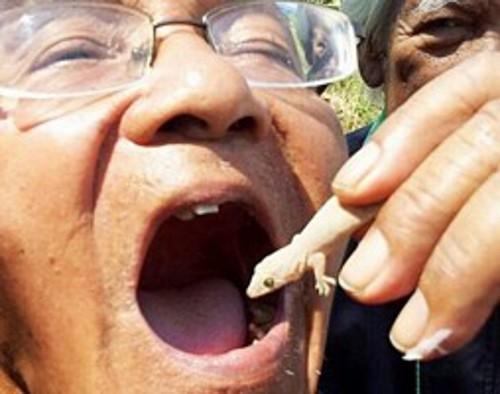 Dokrak Umsaeng, originally from Ang Thong, says he has been eating small geckos, which are commonly found on walls in Thailand, for 12 years – and has no plans to stop it.

Lert Thetjaem, the former village chief of Khlong Si Nuan in the Muang District of Kamphaeng Phet, tipped off reporters from Kom Chad Luek that a man in his village was eating geckos because he claimed they had health benefits.

When the reporters arrived at Mr Dokrak’s house, they found a large crowd gathered outside.

Mr Dokrak was at the center of the crowd holding a plastic bag containing two small, live lizards.

He pulled one of the lizards out of the bag and held it over his gaping mouth. Then he flicked the creature on the head, presumably to stun it, before stuffing it into his mouth. After he took a gulp of water, the gecko was gone.

Mr Dokrak was almost giddy with excitement, as if he had just consumed some sort of stimulant.

One member of the crowd who watched the display, Bunmi Laochaeng, 49, then stepped forward and said that he too would like to eat a lizard.

Mr Bunmi then swallowed the second gecko, looking as if he was going to be sick as the creature travelled down his throat.

Mr Bunmi told reporters he had never eaten a gecko before but wanted to try one after hearing Mr Dokrak extolling the health benefits.

Mr Dokrak told reporters he had been eating lizards for 12 years because he thought they could cure disease.

He claimed that he used to suffer from shortness of breath but that eating geckos cured him.

He said eating lizards was an old belief that had died out. When he was a child people regularly grilled and ate lizards because they believed it would make them strong.

“The way you eat geckos is to take them and grill them. Or some people cover them in wet tamarind and eat them,” said Mr Dokrak.

“These days, whenever I find a lizard I grab it and eat it straight away. Sometimes I don’t eat one for half a month as there aren’t many left and finding them gets harder and harder every day,” he said.

“But for health, eating one every two or three days is good. The important thing is that it also increases your sexual power,” he added.