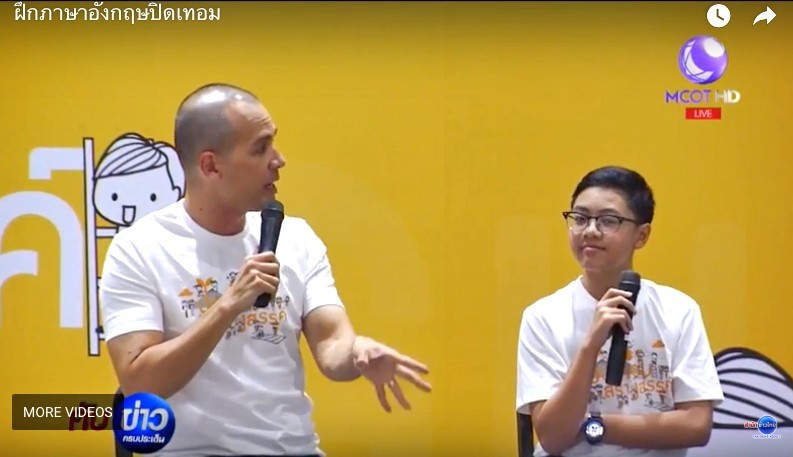 Young Thais students are still being subjected to a largely rote learning style of education. But some young Bangkokians are speaking out about widening their education and life to embrace the English language as well. And some Universities say they’re on the right track.

tnamcot.com is reporting that Thais who are speaking English and conversing with foreigners have big advantages in the workplace. In addition to getting better jobs and a higher income, their life will be enhanced by being able to speak English.

The TNAMCOT video starts with a young Thai called Thanachart Piamlapthanaboon who has won an award from Cambridge University in the UK. He gave an articulate speech about learning where he states that there should always be a “purpose behind your actions”.

Thanachart’s efforts at being brave by speaking to foreigners and using literature and movies to enhance his ability and fluency, have given him advantages while other classmates are stuck in a rut of traditional rote learning for tests.

Chris is a native speaker of English who went to Bangkok Patana School, one of the leading British international schools in Bangkok.

Chris promotes the idea that grammar is just a small part of learning English and that kids should be encouraged to develop all aspects of their life by using English stimulus from all around them.

Online learning and talking to foreigners are two of the ways. Chris is determined to take children out of formal rote learning and give them real experiences that will make them grow.

University chiefs are backing his stance saying that in the job marketplace it was proven that ability at English was prized leading to better employment opportunities, higher salaries and a better social life.

Chiang Mai: Judicial officers have “no plans to move out” – Doi Sutep housing controversy heats up