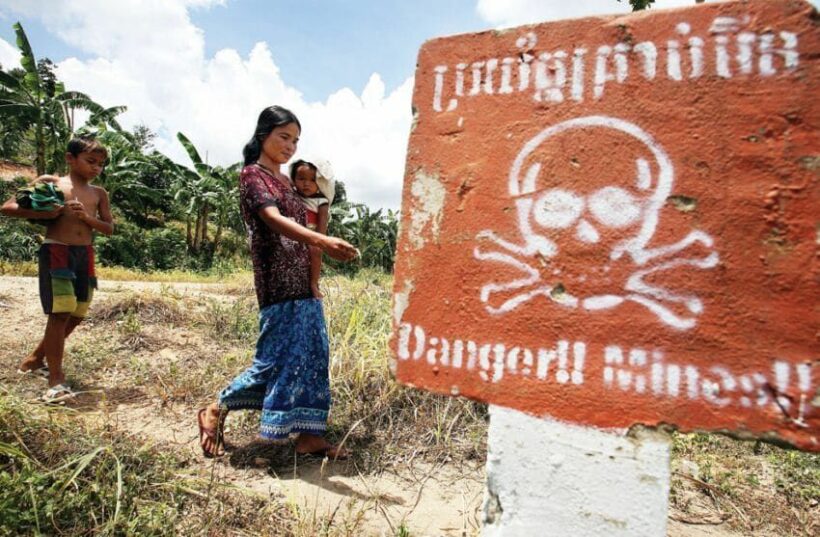 Thai and Cambodian officials have agreed to remove mines in shared border areas. Cambodian PM Hun Sen instructed provincial authorities to clear the mines after partaking in the 30th anniversary of the mine action exhibition. According to Phnom Penh Post, the PM called on all relevant authorities to work with the Thai side of the border before discussing border issues at a later date.

“Thai Prime Minister Prayut Chan-o-cha and I have already agreed on demining along the border, to clear areas where there are mines, regardless of border issues as defining the demarcation line can be done later.”

Although Hun says he had previously sought to demine the border areas by requesting Thailand’s cooperation and was met with no response, this time PM Prayut raised the issue at the ASEAN Summit. Hun Sen says Prayut stated that there are more than 40 square kilometres to clear on the Thai-Cambodian border.

“Prayut Chan-o-cha said that now there are more than 40 square kilometres of land with mines or suspected to contain mines, so we need to remove them all before resolving the demarcation line issue later. To ensure people’s safety, we can work together to decide which areas Thailand clears and which Cambodia clears.”

Cambodia has reportedly already cleared all landmines from its shared borders with Laos and Vietnam. Hung Sen noted that the number of casualties from landmines had dropped sharply to less than 100 per year over the past decade. Cambodia has cleared Phnom Penh and other provinces of mines, with 1,705 villages being declared mine-free.

CMAA is moving forward with plans to hold a global conference on victim aid in Cambodia in 2023, which will see 36 countries in attendance.