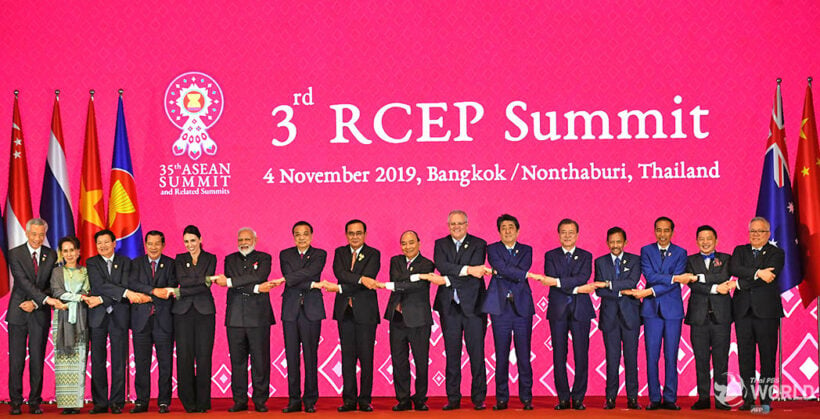 Whilst the US is consumed with polarised internal politics and building walls, and the UK economy withers under nearly four years of paralysing Brexit farrago, leaders from 15 Asia Pacific countries, including South Korea, China, Japan, Australia and New Zealand, are poised to sign onto the world most powerful trade bloc – RCEP.

Yesterday, despite some concerns from the Indian delegation, the group declared that they had reached agreement on all 20 chapters of the trade “megadeal” and expressed their willingness to sign it in 2020.

The RCEP negotiations were launched in May 2013 and were expected to be complete by the end of this year.

The declaration was made – without India – during yesterday’s RCEP summit in Bangkok. All participating countries agreed to make efforts to resolve the remaining issues so that India too can participate in the RCEP by the time the deals is signed off early next year.

The statement was prepared after after a furious day of negotiations where India expressed its issues about the possibility of Chinese goods flooding the shelves of Indian businesses.

“Against the backdrop of a fast-changing global environment, the completion of the RCEP negotiations will demonstrate our collective commitment to an open trade and investment environment across the region.”

“We are negotiating an Agreement intended to further expand and deepen regional value chains for the benefits of our businesses, including small and medium enterprises, as well as our workers, producers, and consumers.”

The RCEP, according to the statement, will “significantly boost the region’s future growth prospects and contribute positively to the global economy, while serving as a supporting pillar to a strong multilateral trading system and promoting development in economies across the region.”

The 15 leaders reiterated the importance of the multilateral trading system, the RCEP, in the face of threats including protectionism.

8 Vietnamese arrested – investigation into 39 container deaths in the UK