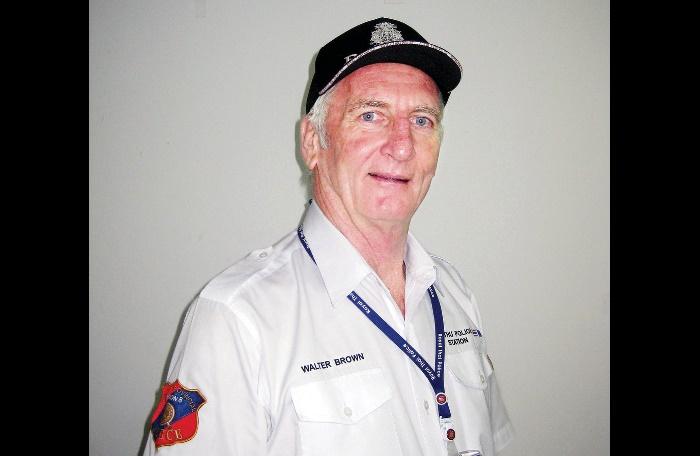 PHUKET: Walter Brown, or ‘Wal’ as he is popularly known, is the founder and coordinator of the Region 8 Police Volunteers.

Originally from Australia, Wal has been in Thailand for about 10 years now. He had already been retired for 15 years before he arrived here. Living on a 40ft motor cruiser in the tropics of north Queensland, Thailand was nowhere on the horizon for him.

All that changed when a friend asked him if he would be interested in participating in The Kings Cup Regatta. He came here for the regatta, and then again several times after that, before deciding to settle down here.

“I am a mechanic by trade and was working as a director at a technical college group in New South Wales. After I moved here, I was approached by a volunteer working with Immigration who asked if I would like to assist them. That’s how this all started, with a bit of training about filling in forms and so on. I started spending two days at the Phuket Immigration Office and three nights patrolling the streets of Patong,” says Wal.

He did this for several years before the then-superintendent at the Phuket Immigration Office discussed with him his concerns about supervision of the team working in Patong. After a bit of planning, a volunteer police group was proposed in 2009, which was to work under the supervision of the superintendent. It didn’t start for another 10 months, however.

“Why we [eventually] started the group is lost in what we do now. We have been asked to assist in most police stations, hospitals, jails and courts in Phuket. We also have one of our group working with rescue foundations. By word of mouth, we were made aware of many concerns of tourists and expats with personal issues, and we have identified this as an important area to work on,” says Wal.

In 2010, Wal and some of his colleagues started a formal volunteer program in Patong. The group started with seven people, but over the years, the number has expanded to about 30. The group does not have a traditional office and has been working out of Wal’s restaurant in Patong for the past six years.

The requirements to be a volunteer with the group are to be over 21 years of age, to come from another country, to have a valid passport and a long term visa, and to have a good command of English and a good understanding of Thai culture, Wal says. Participants must also be able to fund themselves with a uniform and equipment and be able to work at least one night per week, in addition to attending the occasional meeting.

“Our aim is to assist tourists in need and to take their case to the next level, be it the consulate or embassy of their country, or to get them in touch with a family member or friend,” he says.

“We have meetings where we can discuss our concerns, especially the feedback from visitors and tourists. This forum is important as it allows us to get to the core of the problems and figure out who is responsible for fixing a particular problem.”

The group’s biggest problem, Wal says, is recruiting and retaining volunteers. Once he has a full complement, he plans to take on a more unofficial role as trainer.

“We possibly need another 30 people to provide year round service and allow members flexibility for taking vacations and breaks. This would require a complete restructuring of our program – we would need to be more formally organized and have more people to visit tourists in need throughout the island,” he says.

Supervising 30 people from 12 different countries, all between the ages of 23 and 76, is a challenge, but a rewarding one, he says.

He invites anyone who is interested in joining the group to call him on 084-447 1978 or to ask for him at Patong Police Station or the Police Box.

Profile: Mitr Kokopan – Around the world and back