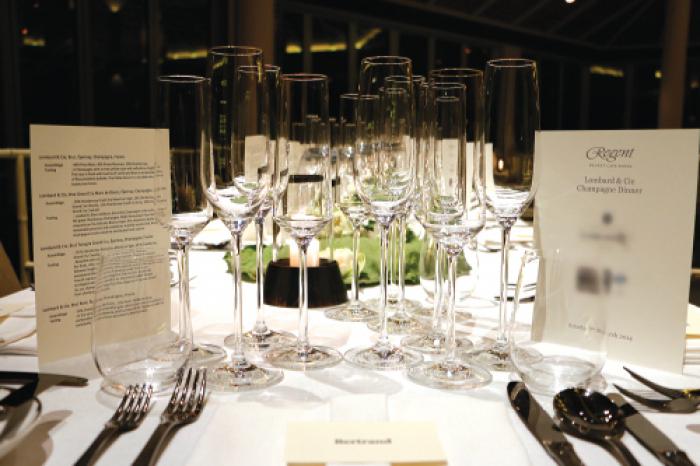 PHUKET GAZETTE: A hush fell over our table at the Regent Phuket’s Lombard & Cie dinner last Saturday when the main course was served. It wasn’t the silence of ravenous diners devouring their food in a few bitefuls – we hadn’t yet picked up our forks. It was a reverential quiet for the beauty of the presentation, and it lasted a good long moment.

The dinner, the first the year-old resort has hosted, showcased the king of wine, France’s precious Champagne – not just as an aperitif, but with every course of the meal.

“We were given the wine list first, then built the menu to suit it,” explained Regent executive chef Justin Baziuk, whose career has taken him from his native New Zealand to five-star resorts around the world.

Basing his creations as much as possible on farm raised, free range meats and organic produce, Chef Baziuk says that he takes “The fundamentals of cooking the simple things, and the classic techniques… and looks to the future, examining every aspect of eating to try and create new sensations, textures, experiences, and emotions.”

There were 28 guests at the 2,500 baht per head meal, and when we moved to The Restaurant to eat, we sat together at three tables, giving the event the feel of a dinner party. The kind of dinner party where servers stream from the kitchen in a long line and set down the food in front of diners simultaneously, in a choreography that makes you feel, well, rather regal.

But back to the food, and the plate that struck us dumb. It was a harmony of fall colors, a golden orange crescent of carrot puree that held seared pieces of deep red lamb and bright green peas. Clear brown jus pooled to the side, and faint purple slivers of beetroot cress adorned the meat, which hid a mound of mashed turnip. Off to the northern end of the plate were pebbles of black olive liquorice.

We broke through our haze and began to eat, but were silent still, this time appreciating how each taste added to the last and built on the next. And we puzzled over that little pile of olive bits, and marveled at the alchemy that allowed it to enhance all the other flavors.

“We dehydrate Kalamata olives, then chop them up in a coffee grinder, add almond meal, brown sugar, and then flavor it with star anise,” Chef Baziuk said.

“The saltiness of the olives hits you first, and then the buttery puree and earthy lamb take over, but it’s not until you swallow that the anise flavor is released,” he added. It wasn’t a single taste he had in mind for us, but a symphony with the main soloist – the Champagne. Did the wine complement the food? Or maybe the food complemented the wine? Hard to say, but the pairing was impeccable.

Special as it was, our lamb reverie wasn’t the only highlight of the meal. Just before, we’d been delighted by the spectacle of science meeting haute cuisine. It was ostensibly a simple between-courses dish, a sorbet palate cleanser. As the serving corps marched somberly towards us, carrying what appeared to be small goldfish bowls, white clouds of fog wafted up and around them. It was dry ice, and in a little dish above the bowl, yuzu flavored foam, orange-colored crystals and a lemon grass and ginger sorbet which somehow brought forth only the mellow side of the root, leaving behind its spicy sharpness.

But the drama didn’t end with the fog. Suddenly, I heard an odd noise – coming from the mouth of my dining companion. Those crystals were exploding in his mouth like fireworks, mimicking the bubbles endlessly rising in our glasses, and making us smile and feel ten years old.

By that point, we’d eaten our way through a seafood tasting plate, where we raved about a soft cured salmon, “cooked at 45 degrees for 25 minutes,” Chef Baziuk said, which took the fish just to the other side of raw and left it to fall apart under the stroke of our forks – and a white rabbit potage, with each course accompanied by a different bubbly.

The course that followed the lamb, the mysterious Rocamadour, was served in a teacup, along with a sliver of toast strewn with tiny flower petals.

“It’s a goat cheese from my region of France, the southwest,” revealed GM Borin. “I use it every chance I get. We just got it in and it’s only about two weeks old, so it still has a light flavor.”

Mixed with creme fraiche and small chunks of tomatoes, it almost resembled a soup and made for a remarkable cheese course.

A mille-feuille with not one, but two kinds of Valrhona chocolate mousse, blonde chocolate truffle, blueberries, four perfect raspberries, two crispy biscuits and a flake of gold leaf, along with a glass of a rose Champagne, finished the meal perfectly.

More dinners will follow, assured GM Borin. They will be well worth attending.

JW Marriott Phuket’s Kabuki restaurant entertains all of the senses