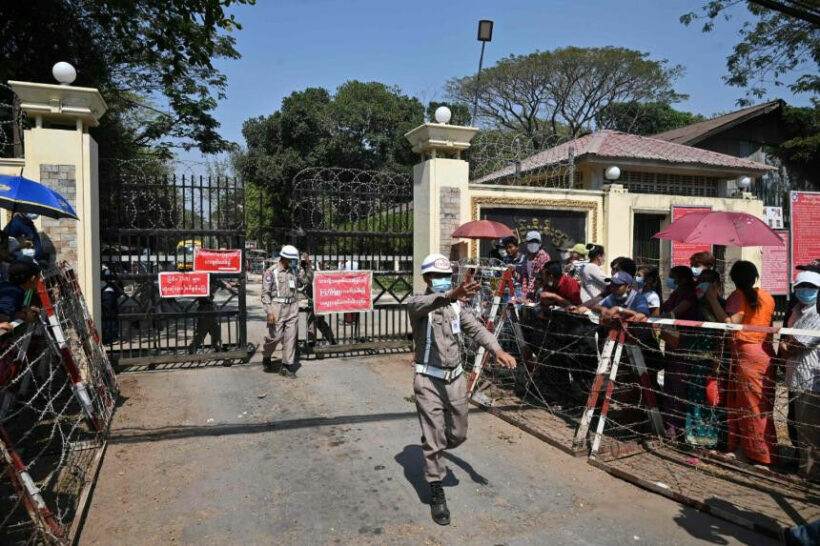 Myanmar’s military government granted amnesty to over 1,600 prisoners, including 42 foreigners, during the country’s New Year’s holiday from April 13-16. The figure is small compared to the 23,000 prisoners released during the holiday last year. Despite Myanmar’s ruling general’s promise to restore peace in the country this year, no political detainees were released.

“As part of the celebration of Myanmar’s New Year, to bring joy for the people and address humanitarian concerns, 1619 prisoners, including 42 detained foreigners, will be released under the amnesty”, said State Secretary Lieutenant General Aung Lin Dwe. The foreign prisoners will be deported upon release, he added.

Since the military took power over Myanmar by coup in February last year – ousting the elected government of Aung San Suu Kyi – at least 13,282 people have been arrested and 1,756 people have been killed by the military in Myanmar, according to the Assistance Association of Political Prisoners (AAPP).

Family members of prisoners waited outside Yangon’s infamous Insein Prison on Sunday, not knowing whether their relatives would be released or not, according to a local reporter. However, relatives of those arrested for political crimes were disappointed as political detainees are still being “held as hostages” by coup leader Senior General Min Aung Hlaing, according to a senior member of the Former Political Prisoners Society.

A mother of a police officer who joined the country’s civil disobedience movement against the military was among those waiting outside the prison to no avail. She said she had waited outside the prison several times during previous amnesty releases.

A mother of a 22 year old pro-democracy protester who was arrested eight months ago also waited outside the prison and said her son wrote to her to say he might be released in the amnesty.

A mother, whose 19 year old daughter is serving three years on a political charge, also waited outside hoping for her release: “Now, she has been more than one year in prison”, she said.

Myanmar “pardons” prisoners of their crimes annually to mark the Buddhist New Year. However, a significantly lower number of prisoners were released this year. Most of the prisoners released were drug offenders and petty criminals, according to Myanmar Prisons Department Spokesman Khin Shwe.

Like Thailand, Myanmar’s New Year celebrations usually feature water fights and street parties. However, this year the streets were quiet in protest of the military junta. Opponents of military rule called for a boycott of government-supported activities this year which was supported nationwide.

In Yangon, the government built three main pavilions and broadcasted the official ceremonies on state television. However, few people beyond those affiliated with the military government attended the events, according to local residents.

Military crackdown continues in Myanmar and the violence that began with a military coup over a year ago shows no signs of stopping. The military has recently carried out violent attacks against civilian militias and ethnic rebel groups in both the countryside and urban areas. The UN has characterised Myanmar’s current situation as a civil war.

Claims of control over territory cannot be officially confirmed. However, the acting president of the self-proclaimed National Unity Government Duwa Lashi La claims her party has seized control of some areas…

“I’m happy to report to you on this auspicious Myanmar New Year that our resistance forces and ethnic armed forces are now controlling much of the country, particularly rural areas, as well as positions around several major cities.”