In the wake of the ‘marriage of a 41 year old Malay man and an 11 year old Thai girl, Malaysia’s government and netizens are proposing ways to ban child marriages.

Meanwhile, an online petition by a UK-based Malaysian Muslim father to ban child marriages has triggered an activist to begin a similar petition to ban them in Thailand too.

Umran Kadir, 40, said a “friend of a mutual friend” had started a similar petition.

“Two days ago I was contacted by an activist from Southern Thailand, as the people there are pushing their leaders to ban child marriages too,” he said.

Umran said the man had asked his permission to use the same illustration he used for his petition. 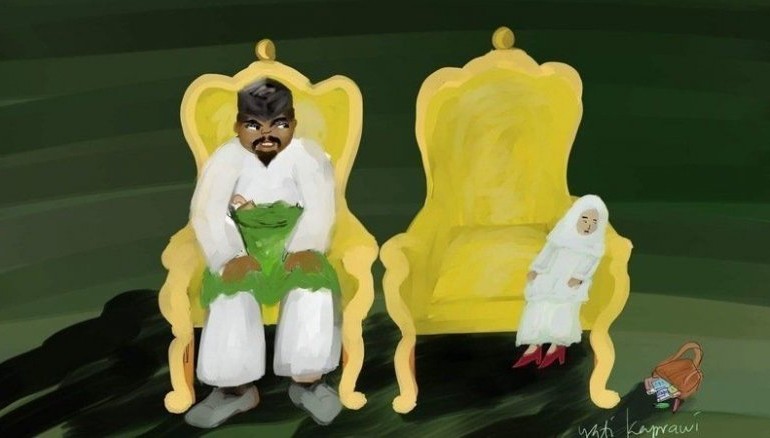 Read the original story about the ‘marriage’ between the 41 year old Malay man and an 11 year old Thai girl HERE.

On his Facebook, Ekraj said… “In response to the child marriage case of the 11 year old Thai girl and 41 year old Malaysian man, Thai and Malaysian civil society have coordinated efforts to rescue the girl and explore the long-term prevention of sexual exploitation of children by eradicating child marriages.

“There is a long way to go to bring the man to justice and ensure our long-term collective aspirations are fulfilled. We need your support to achieve sustainable protection of our children and women. Thank you!

“The petition says that members of the Organisation of Islamic Cooperation (OIC), such as Algeria, Oman, Bangladesh, Pakistan, Egypt, Kenya, Morocco, and Turkey have set the minimum age of marriage at 18 years of age. However, in Thailand, child marriages are permitted under the Civil and Commercial Code.

With an exception under the Civil Procedure Code, a man who has sexually assaulted an underage girl regardless of consent, which is a criminal offence under the Penal Code, can marry her with the permission of the court and by fulfilling the requirements of the law, it said.

The Islamic Law on Family and Legislation, and the Act on Application of Islamic Law in the Provinces of Pattani, Narathiwat, Yala and Satun, do not prescribe the minimum age of marriage but leave it to the discretion of the court, it said.

This has created a legal loophole for child marriages to be legitimised based on local norms and customary practices in several cases, all of which are in violation of the Child Protection Act, it said.

The loophole resulted in the case of a 41 year old man from Kelantan marrying an 11 year old girl from Narathiwat, Thailand.

In his petition, Ekraj also said that child marriages in the southern provinces of Thailand continue to be misused to deal with premarital pregnancy and rape, and to escape poverty.

“To protect the 11 year old girl and to prevent exploitation, sexual abuses, and for the long-term prevention of exploitation of all children, the undersigned individuals and organisations of the open letter urge the provincial governor of Narathiwat province, as the chairman of the Provincial Child Protection Committee responsible for the Child Protection Act to lodge a police report as a necessary prerequisite for the relevant authorities to investigate the case,” the petition reads.

It also said that the Thai government must seek the cooperation of the Malaysian Government to improve on the law and ensure their compatibility to prevent the misuse of legal loopholes between the two countries.

Meanwhile, Umran’s petition on change.org has received more than 22,000 signatures (at press time) since he initiated it on July 11 (July 12 Malaysian time).He also wrote an open letter to the Deputy Prime Minister on Thursday morning urging her to take a bold step towards ending child marriages.