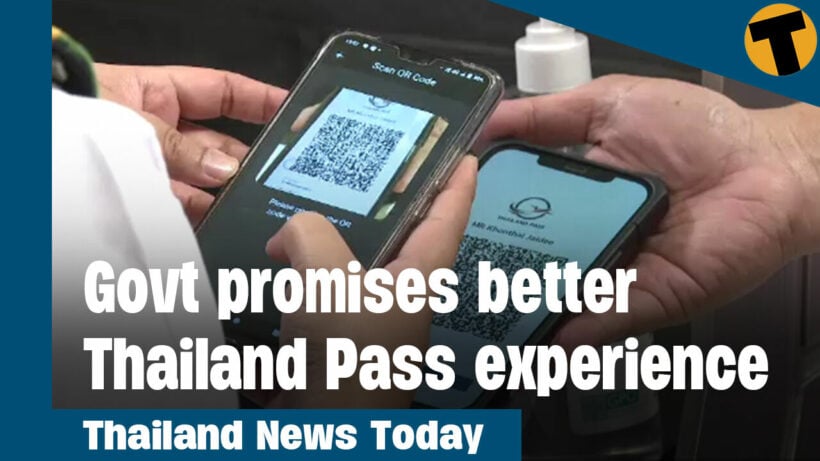 After some glitches with the Thailand Pass, including a data breach, authorities say the system is being improved to make it more convenient for those travelling to Thailand.

A government spokesperson says the Prime Minister has ordered related agencies to quickly fix the system to ensure there are no delays with the approval process, adding that foreign tourism is essential for reviving Thailand’s economy.

The email database collected through the Thailand Pass system has appeared to be compromised as some applicants have reportedly received spoof emails warning them that there is a problem with the request and that they should download an attached document.

The government later came out with a notice warning applicants about the email, saying it does not come from Thailand Pass and “could compromise the security and privacy of your personal information.”

Application approvals have also taken time to process and travellers need a QR code from the Thailand Pass system to enter the country. A spokesperson says the Digital Government Development Agency has accelerated the approval process, sending travellers a QR code within seven days. Apparently, that’s fast for them.

Pattaya is looking to India to salvage what is left of tourism during the forthcoming low season, as Thailand plans a travel bubble with the South Asian nation.

According to a report, the Tourism Authority of Thailand is preparing a marketing plan targeting would-be visitors from India. The country is one of the few short-haul markets that doesn’t require its citizens to quarantine on their return from overseas.

Thanet from the Chon Buri Tourism Council is hopeful that pent-up demand will boost visitor numbers but says this will depend on how many airlines resume flights between both countries. He is hopeful the low-cost carriers will return to the skies as they have the potential to generate more passenger numbers.

Thanet says the recent surge in Covid infections has had a negative impact on domestic travel to Pattaya, despite the government launching the 4th phase of the We Travel Together stimulus campaign. He adds that seminars and meetings of state agencies organised for Pattaya have also been postponed.

In addition, new registrations under the revamped Test & Go entry scheme are lower than when the scheme first launched last year. Thanet believes the drop is due to the high season coming to an end soon, but the revised scheme now includes a second PCR test on day 5, a factor many critics say is a deterrent for would-be visitors.

Meanwhile, the TAT has already planned a number of trips from India to Bangkok, Chiang Mai, and Koh Samui. Thanet Phetsuwan from the TAT says the trips are taking place between February 15 and 22, with more trips and wedding symposiums due to happen in March.

The TAT says it plans to attract at least 500,000 Indian visitors during the current fiscal year, which will end in September.

A highly-respected specialist in respiratory illnesses says the Thai government needs to completely change tack in the way it’s dealing with Covid-19.

Posting on his Facebook page, Dr Manoon from Bangkok’s Vichaiyut Hospital has called for an overhaul in how new infections are dealt with and wants expensive PCR tests ditched altogether.

The prominent medic says that as it becomes clear the Omicron variant generally results in less severe illness, the government needs to focus on reallocating its money to treat people with other serious diseases.

Manoon points out that deaths from Omicron are 6 times lower than those from earlier variants and its symptoms are similar to those of the common cold for patients who are fully vaccinated. With 70% of Thailand’s population vaccinated, and around 25% have received a booster dose, he says the government must now treat Omicron as several other countries are doing.

The doctor goes on to point out that a number of countries have ditched the need for expensive PCR tests, due to the significant costs involved. He believes PCR testing should be reserved for those in high-risk groups who are likely to end up hospitalised with Covid, as well as the elderly population in care homes.

He has called on anyone who thinks they may be infected to use an antigen test kit, adding that in several countries, people with only mild symptoms are not quarantined but allowed to self-isolate at home. He is also calling on the government to stop providing medical supplies and treatment to everyone who is in home isolation, regardless of symptoms.

He was quoted saying “The government should not give Favipiravir medicines, thermometers or oxygen checkers to everyone who gets infected. The kits should be distributed only to people in risk groups, the elderly, those with 7 comorbidities, pregnant women, and the unvaccinated.”
Manoon says he’s in favour of the government’s plan to remove Covid-19 from the list of illnesses covered by the Universal Coverage for Emergency Patients scheme from March, as he says the government needs to save money for taking care of people with other diseases.

As Covid-19 infection numbers surge in Bangkok, sorry I mean Krung Thep Maha Nakhon, officials have set up another 1,000 beds in isolation facilities across the capital.

According to a report, the Krung Thep Maha Nakhon Metropolitan Administration has instructed all 50 district offices to create more community isolation facilities.

Krung Thep Maha Nakhon governor Aswin Kwanmuang says the additional isolation facilities will help ease the burden on hospitals and the healthcare system. Covid patients who are asymptomatic or have only mild symptoms can be treated at the centres, keeping hospital beds free for the seriously ill.

According to Aswin, the 1,000 extra beds are in addition to 13 community isolation centres already operating across Krung Thep Maha Nakhon.

Alright, that’s enough of that nonsense. I’ll stick to saying Bangkok, thank you very much.

He was speaking to reporters as he inspected an isolation centre in the Klongtoey district.

At that facility, 400 of the 500 beds were already occupied. The governor says around 45% of Bangkok’s 3,500 beds are now occupied – much better, but says there are no seriously ill patients going without treatment.

The capital is currently grappling with a spike in Covid infections, with the highest number of cases in the country. Since Thailand’s first reported case of the Omicron variant on January 1, Bangkok has recorded 62,954 cases of the virus.

Of those, 2,800 cases are in the capital. 136 are imported infections but the vast majority are cases of local transmission. The CCSA also announced 27 Covid fatalities yesterday.

But according to the Faculty of Medicine at Chulalongkorn University, apparently, yesterday’s CCSA report does not include over 11,800 people who received a positive result through antigen tests.

The Tourism Authority of Thailand is keeping its chin up, as it wants to target – here we go again – wealthy travellers, skilled professionals, and remote workers, wherever they are.

The target age groups include millenials and retirees alike. The TAT governor says the goal for tourism this year is to earn the country 2.4 trillion baht, 80% of what was made in 2019, by 2023.

Right now, tourism revenue is set to meet 1.28 trillion baht in 2022. The TAT says at least 626 billion baht in tourism receipts will come from at least 10 million international travel arrivals spending 62,580 baht per person on average.

The TAT deputy governor of marketing for Asia and South Pacific said one population TAT is working to tap into is environmentally conscious millennials. He said another potential group that could get interested in Thai tourism is the South Korean gay community, which often watches Thai gay TV dramas. Wow they really are turning every possible stone.

The deputy governor said in the past, movies and TV shows have inspired people abroad to visit Thailand. One example is Lost in Thailand, a Chinese movie about three Chinese men travelling in Thailand. Even though the film came out in 2012, many Chinese fans of the movie continued for years to travel to Thailand and visit places from the movie. In 2020, about 6,000 Chinese tourists a day arrived in Chiang Mai, where many of the movie’s locations are.

Thaidup
Sweden's approach of "let it rip" and will all be over is looking good from HK's point of view now. Was better than welding doors shut on families.
HiuMak
18 hours ago, Thaiger said: Hong Kong’s healthcare is being overwhelmed by a big surge in new Covid infections. Patients showing symptoms are now having to be treated outside the crowded hospitals. The government admits it is struggling to contain…

riclag
The deterrent is all the fees especially the forced covid insurance!

riclag
9 hours ago, Bno said: As Delta variant is long gone. TCP tesg is not able to detect adverticed to say the least. Omicron have made the global population immun. Nation after natin iis opening up. Still Thailand still keep…

DoUKnowWhoIAm
Shock horror! It wasn't possible to shut the door to lock a virus out.

Man rescued after hanging from cliff overnight, held up by shirt tied to trees