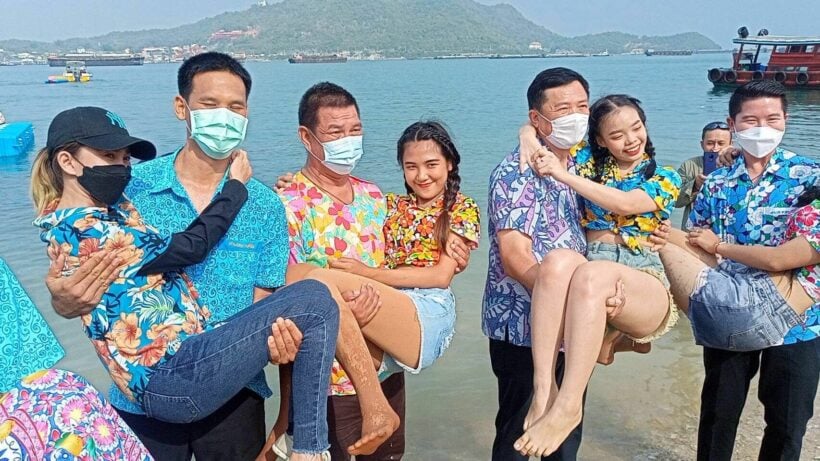 Koh Kham, located near Koh Sichang in Chon Buri province, held a traditional activity to celebrate the post-Songkran tradition of “Aum Sao Long Nam” — or “Carrying Girls into the Sea”. The event is traditionally held annually on April 18 following the Songkran festival. Yesterday marked the first time the event has been held in the past two years due to the pandemic.

The opening ceremony for this year’s edition of the Aum Sao Long Nam event was held on Monday morning at Koh Kham Yai Beach. The president of Chon Buri’s Provincial Administrative Organization was in attendance. The event invited locals and travellers, both Thai and foreigners, to make merit, join a beauty pageant and have fun with the highlight activity — carrying girls into the sea.

Locals on Koh Kham have been hosting the event since King Rama 5 was in power. It has traditionally been held after Songkran because that’s the perfect time when family members or couples met each other. To join the activity, a man will invite a woman he loves — i.e. wife or girlfriend — or a female relative he respects — i.e. mother or elder — and then carry her into the sea. Depending on their strength, men may carry multiple women into the water.

The Mayor of Koh Sichang added that many foreigners and Thai travellers who were not the locals on Koh Kham also participated in the festivities. He said carrying girls into the sea was a unique traditional activity that could draw the attention of tourists from all over the world.

Noble_Design
I would rather carry girls to youknowwhere
Ramanathan.P
Hopefully the men are having better back support belt to protect their spine from back injury and vertebra dislocation just to avoid permanent injury to their backs, which could cause a devastating effect in their life after that......

Guest1
10 minutes ago, Ramanathan.P said: Hopefully the men are having better back support belt to protect their spine from back injury and vertebra dislocation just to avoid permanent injury to their backs, which could cause a devastating effect in their…
HolyCowCm
A beauty pageant as well. Sounds like fun.
Naanlaew
Is this supposed to bring good luck or drive out the evil spirits ?