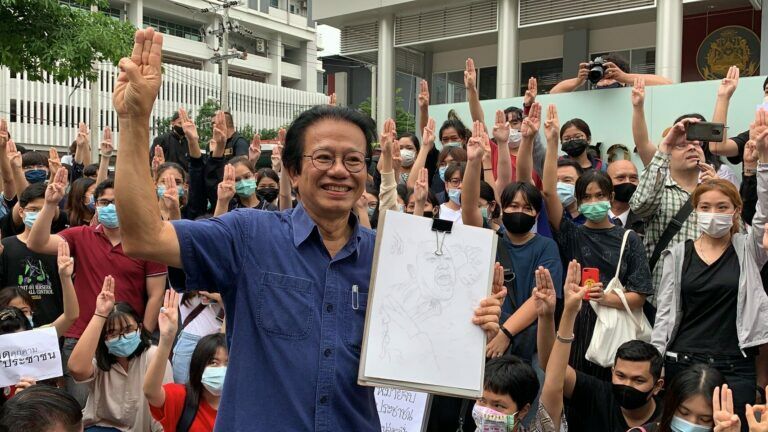 Dr Tossaporn Serirak, the former Pheu Thai Party MP, is demanding the government provide a full disclosure regarding the distribution of the 1.5 million doses of Pfizer that the United States donated to Thailand.

The former MP, who says he represents the “people’s sector”, delivered a petition this morning to Public Health Minister, and man deprived of credit for vaccines donated by the USA, Anutin Charnvirakul, requesting explicit details of the Pfizer vaccine distribution.

Dr Tossaporn tells the media that he has been on the receiving end of complaints from medical officials who are involved in combatting Covid. He says they have spoken to him about their reservations about the vaccine distribution. Further, Dr Tossaporn says many people who are not frontline medics/uneligible people are still getting the vaccine.

Meanwhile, Anutin says the ministry has allocated the vaccines to ensure that all frontline medics are vaccinated without discrimination. He also swears there is no special vaccine allocation to specific groups.

Dr Tossaporn had previously been arrested while attending a pro-democracy protest and attending to an injured protester. In fact, the doctor’s civil disobedience has made him something of a folk hero in Thailand.

Col
And AZ was designed in the UK and given to the world for free, who gives a rip who pays what .. we pay 150 million£ for a damm footballer. Get the world vaccinated

JamesE
On 8/11/2021 at 6:34 AM, MTa449 said: As always we (USA) stand on the forefront of many medical breakthroughs and some perceive this as a status of arrogance and superiority thus completely missing the entire point ! We do this…
EdwardV
43 minutes ago, JamesE said: The US has shipped, or committed to ship, 80 million doses - including 60M AZ which are manufactured but not approved for use in the US.  The US has already donated 110M doses and none…

JamesE
1 minute ago, EdwardV said: The US has already donated 110M doses and none of them were AZ. The original commitment is for 250M doses donated by year end. That’s just the first target, the larger one is to donate 1B…
Anhlam78
Humans ways lie when they promise something to prevent any repercussions to come back at them.  Just look at a politician when they promise something.  Never comes true.