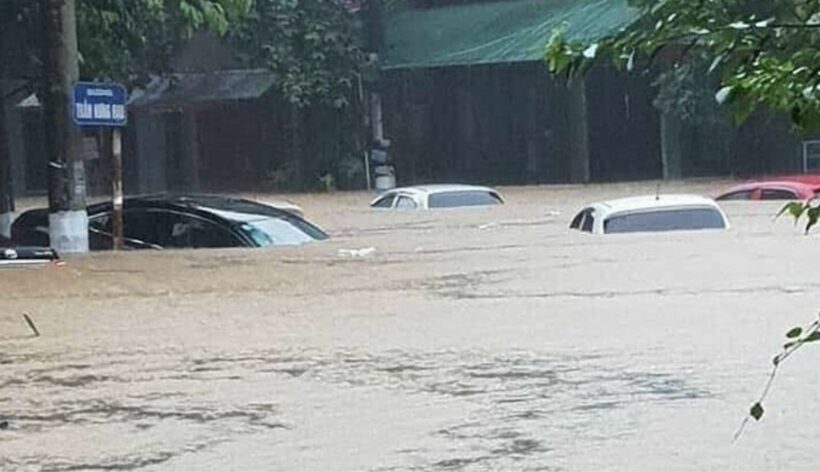 Heavy rains and flooding in the far north of Vietnam are causing havoc. So far at least 5 people, including 3 children have died in the Ha Giang Province. The region has experienced heavy flooding over the past 3 days due to torrential rains causing traffic jams, landslides and cutting off some remote areas. Streets in the region’s main towns were flooded up to a metre deep and cars were unable to traverse a section of National Highway 2 due to a collapsed city gate. Two cars were also swept away into the Lo River.

A 44 year old woman and her teenage daughter were asleep in their house in the Hoang Su Phi District when rocks collapsed onto the house before sunrise yesterday.

A few hours later, another woman and her 13 year old daughter were buried as landslides hit their rent house in the same region. Emergency services found them and rushed them to hospital. Only the 48 year old mother survived. Then a 2 year old from Bac Quang District was reported as drowned amid the flooding in the mountainous areas north of Hanoi.

Meanwhile, a truck passing a spillway in Bac Me District slid off the road into a stream. Authorities used a bulldozer to recover the car, with the driver stuck inside, only to find him dead.

Several northern Vietnamese regions were deluged with heavy rain since last Friday, including Ha Giang and Bac Giang Provinces. More heavy rains are expected up to the end of today in Lai Chau, Lao Cai and Ha Giang provinces. As much as 215 hectares of rice and crops have been inundated while 2 hydropower plants in the province had to be switched off due to landslides.

In the first 6 months of 2020, 47 people have died and 130 injured in Vietnam due to natural disasters, according to the Central Steering Committee for Natural Disaster Prevention and Control.