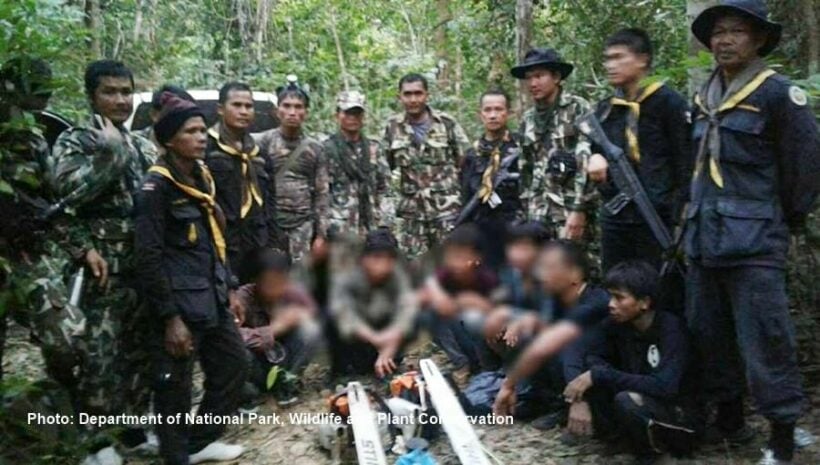 Two men face up to 20 years in prison and a 2 billion baht fine after being arrested for the illegal felling of one of Thailand’s most protected trees in the Sangkha district.

Acting on a tipoff, a police team swooped on a clearing in Huay Samran forest, south of Moo 10 village in tambon Thepraksa, to find the 2 men at work illegally cutting and processing Siamese rosewood trees.

The 2 men, 35 year old Narongrit Pramernchai and 42 year old Uan Sapsee, both from Sangkha district, were arrested and charged with illegally felling protected trees, a violation of the Forestry Act (1941), and having drugs in possession.

Under the National Parks Act, the 2 men face up to 20 years in prison and a fine of 2 billion baht.

Siamese rosewood is a valuable hardwood found in Cambodia, Laos, Thailand, and Vietnam.

Conservationists predict that the species could be extinct within the next 5 years.

The demand for furniture made from Siamese rosewood is high in China and led to an epidemic of illegal logging and trafficking, threatening the species with extinction and resulting in a war with poachers. In 2015, 7 Thai forest rangers were killed trying to shut down illegal Siamese rosewood logging.

The Environmental Investigation Agency revealed rosewood prices started to spike with the increase in Chinese millionaires and the lead-up to the 2008 Beijing Olympics. In 2011, EIA investigators witnessed a rosewood bed for sale in China for US$1 million dollars. Since then black market prices have rocketed, making Siamese rosewood more valuable than gold.”

Prasert Sornsathapornkul, director of the Natural World Heritage Office at the Department of National Parks, Wildlife and Plant Conservation, has called for a halt to the illegal logging in Thailand.

Viggen8408
This may be a totally naive question, but if the species is in such danger, why isn't the government through the relevant conservation organisations planting and generating plantations of the tree?  It seems to me that it would be a…

Brazilian student arrested in Bali for smuggling cannabis from Thailand