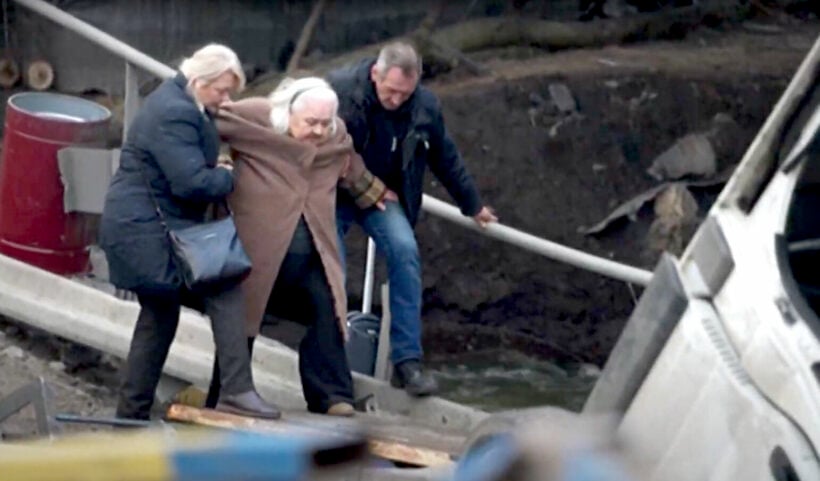 Here’s the latest from Ukraine, as the Russian invasion enters its 13th day…

• Russian shelling continues to prevent the evacuation of civilians from besieged cities including Kyiv, Mariupol, Volnovakha, Sumy and Kharkiv. Fears are mounting for civilians trapped in Ukrainian cities as the Russian onslaught continues.

• Ukraine rejected a Russian proposal to allow civilians to escape via humanitarian corridors, after it came to light that many of the routes would only lead to Russia or its ally Belarus.

• Notably, a Russian strike hit a civilian evacuation point outside Kyiv, reportedly killing eight people, including two children, as they tried to flee their homes.

• Russia has proposed a new ceasefire starting 10 a.m. Moscow time Tuesday in five Ukrainian cities. Ukraine has yet to formally agree to the proposal, which would presumably allow civilians to escape via humanitarian corridors. It’s not yet known where the routes would lead to and if civilians could escape to other Ukrainian cities or neighboring European countries.

• A third round of peace talks between Russia and Ukraine on Monday has ended yet again without a ceasefire and little agreement on terms of peace. A Ukraine official talked of minor progress toward civilian evacuation via safe corridors.

• Moscow demanded that Ukraine change its constitution to guarantee it won’t join the EU and Nato, in order to call off the invasion.

• An estimated 230 Western firms have joined a growing corporate boycott of Russia. Global franchises Coca-Cola and McDonald’s are being pressured to join the boycott as well.

• Russian deputy PM warns Moscow could cut off natural gas supplies to Europe, in retaliation against European sanctions. Meanwhile, the US and its European allies are considering a ban on importing Russian oil.

• However, there are disagreements about the extent of such a ban, as many European nations are more reliant on Russian oil than the US, which produces much of its own oil, while also importing from other countries.

• A Ukraine lawyer at the International Court of Justice says Russia “is resorting to tactics reminiscent of medieval siege warfare.”

• At least 1.5 million refugees have fled Ukraine since the beginning of Russia’s invasion, according to UN estimates, with more than a million feeling north to Poland.

EdwardV
37 minutes ago, Thaiger said: Notably, a Russian strike hit a civilian evacuation point outside Kyiv, reportedly killing eight people, including two children, as they tried to flee their homes. I’m thinking Russia doesn’t understand the concept of a humanitarian…

UKRAINE UPDATES: Russia allows civilians to flee — to Russia, as 95% of its amassed forces now in Ukraine; China to provide humanitarian aid