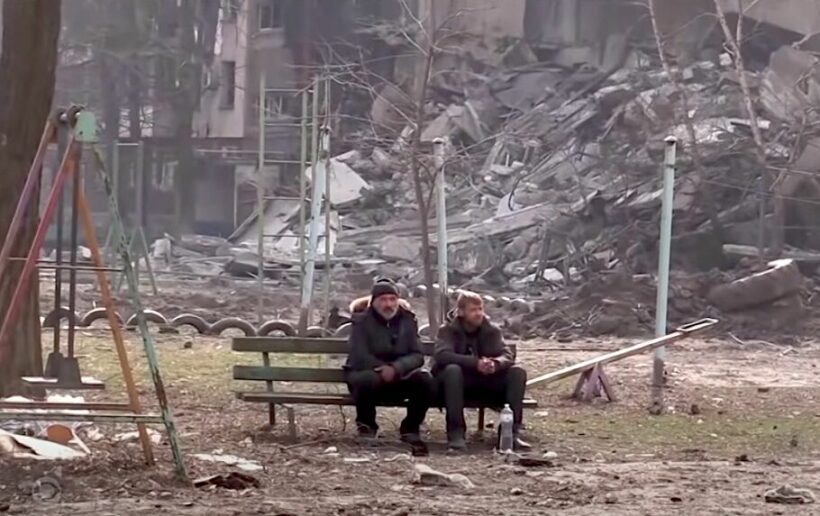 Residents in the battered port city of Mariupol sit on a park bench. Credit: CNBC | YouTube

As the Russian invasion of Ukraine continues into its second month, here’s the latest headlines…

• In a speech in Poland on Saturday, US President Joe Biden said Russian leader Vladimir Putin “cannot remain in power.” His remarks have increased international pressure and further united NATO allies against Putin over his illegal invasion of Ukraine…

“A dictator, bent on rebuilding an empire, will never erase the people’s love for liberty. Ukraine will never be a victory for Russia, for free people refuse to live in a world of hopelessness and darkness.”

“For God’s sake, this man cannot remain in power.”

“The President of Russia is elected by Russians.”

• According to the Institute for the Study of War, Commander Colonel-General Alexander Chayko of the Russian Eastern Military District, or EMD, may be personally commanding Russia’s efforts to regroup its forces in Belarus, as well as continue the mission to encircle Kyiv from the west.

• The report comes after the Kremlin appeared to have publicly narrowed its military objects in an effort to save face, saying its aims to take control of the Donbass region in Eastern Ukraine, with the self-proclaimed republics.

• A senior US defense official has said that Russia may have lost as much as 15 percent of its combat power, according to ABC. Meanwhile, more Russian troops are reported to entering Ukraine from a Russian occupied are of Georgia. US officials estimate that as many as 10,000 Russian troops have been killed so far in the war.

• The ISW assesses that, “The Kremlin is highly unlikely to have abandoned its efforts to encircle Kyiv,” but is unlikely to be able to amass the combat power needed to continued its major offensives around the capital anytime soon.

• In the last 24 hours, neither Ukrainian nor Russian forces conducted any major operations northwest of Kyiv. Meanwhile, fighting continued around Izyum, with minor territorial gains.

• Ukrainian counterattacks east of Brovary have successfully retaken territory on the evening of March 26. Ukrainian forces have also engaged in small-scale counterattacks in Sumy Oblast on March 26-27. Elsewhere, Russian troops are reportedly no longer in ctonrol of the city of Kherson.

• In the south, Russian forces have continued their steady advances in Mariupol. Mariupol Mayor Vadim Boychenko said that half of the city’s residents have been evacuated. Some 540 thousand people lived in Mariupol before the war. Tens of thousands remain trapped in the cit without adequate access to food, water and electricity.

• Ukrainian partisans around Kherson continue to pin down Russian Rosgvardia units in the area, hindering Russia’s ability to continue its offensive operations toward the south. 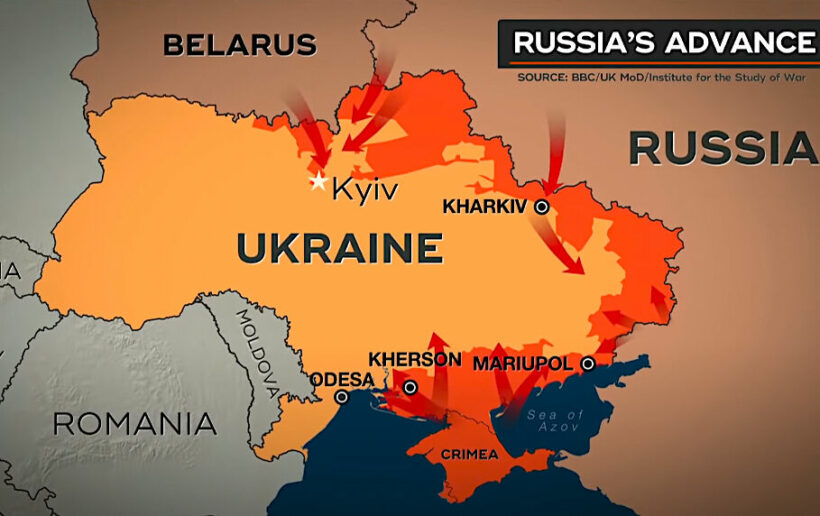 • Videos have appeared online that allegedly show Ukrainian servicemen shooting through the legs of captured Russian soldiers. A Ukrainian presidential adviser has urged the military not to mock the Russian prisoners. The country’s Investigative Committee is reportedly checking the evidence.

• Turkey will host the next round of talks between Kyiv and Moscow on March 28-30.

• Leonid Pasechnik, head of the so-called LPR, said that a referendum on joining the Russian Federation could be held on the territory of the unrecognized republic. But he later emphasised that the main thing now was to “end the war” and clarified that no preparations for the referendum were underway.

• More than 3.8 million people have left Ukraine since the start of the Russian invasion, according to the UN.

• The Ukrainian Air Forcer commander has said that Russian troops fired several missiles at Lviv. Russia’s Ministry of Defense confirmed the strike on Lviv, claiming that they had hit 67 “military facilities” in Ukraine in one day.

• President Zelensky called for French retailer Auchan to leave the Russian market. But leadership of the grocery store chain said they will continue operatations in Russia, serving the interests of the civilians.

• Since the beginning of the war, 139 children have died and more than 200 have been injured, according to official data from the Prosecutor General’s Office of Ukraine.

SOURCE: Institute for the Study of War | Meduza | ABS | CNBC

Biden slams Russia’s Putin as a ‘butcher’, who “cannot remain in power”