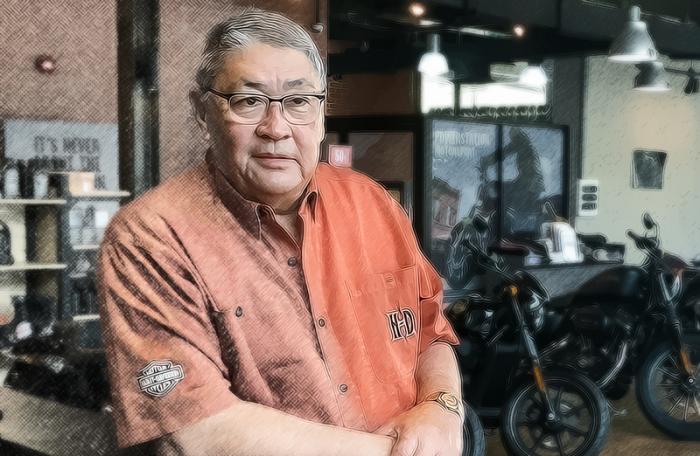 PHUKET: As CEO of Power Station Motorsport, Erik Svensson is responsible for the commercial operations of Harley-Davidson of Bangkok and the newly opened Harley-Davidson of Phuket. However, this 74-year-old man’s love affair with motorcycles started more than 60 years ago, when he was at boarding school in Canada.

Mr Svensson had picked up boxing after moving from his hometown in Japan to Canada for school, but shifted gears when a teacher let him start riding and fixing up his motorcycle. Mr Svensson was 13 at the time, waking up early to ride the tracks before school started.

After years of training, he stepped onto the Daytona International Speedway track for the Daytona 200. It was 1961, the first year the race wasn’t held along the beach.

The ambitious 19-year-old finished just behind Roger Reiman, taking second place after an unfortunate bike stall. Mr Svensson was riding at a time in the race’s history when Harley motorcycles dominated the field. It wasn’t until the 1970s that Japanese-manufacturers really took over the runway.

“I’ve been riding for so long, and so often, that it’s second nature to me. The only thing that’s going to stop me from riding is getting really old,” Mr Svensson says. “Young riders these days just want to go fast – and they get into some serious accidents. I would know, I used to be that young too!

Riding is about getting to understand the feel of the bike and the road so you are the bike, and you can anticipate the changes of the road ahead.”

However, in the early 1960s in Japan, it wasn’t about anticipating the road, as most courses were off road ‘scrambler’ courses.

“Basically a field course with roped roads – it wasn’t much! I grew up there, but motorcycles there were mainly used for transporting young people. Today, it’s a different story there. I was lucky to be in Canada at the time, tinkering around with my teacher’s bike in the garage,” he says.

During his professional racing years, Mr Svensson rode a Tohatsu 125cc and 250cc, but the first bike he ever owned was a 1952 Honda 220cc.

“Riding, like anything, takes practice, practice practice. You do it so often that you don’t have to think about what you’re doing anymore. Like walking,” he says. “What I love about riding is the sense of freedom and the adventure. Every Bike ride is really an adventure. You meet different kinds of people, from all walks of life, and it’s a great way to get grounded and get back to feeling like yourself. I like that about Harleys. They’re the real deal. It’s about connecting back to who you are, in the spirit of freedom and adventure. That’s a big difference with Harley Riders. You meet some very interesting, and grounded, people.”

Mr Svensson opened Harley-Davidson of Bangkok in 2001, after 20 years as the CEO of a successful furniture export company. The original shop was designed to be a garage to service his own bike and also his friends’ bikes. However, it quickly grew to become a hub for motorcycle enthusiasts.

Though a genuine entrepreneur and serious businessman, Mr Svensson leads a rather private life, preferring to spend time with his family, if he’s not busy at work or on the open road with his favorite bike: the Harley Ultra Classic.

For the last eight years, Mr Svensson and his 31-year-old son Kevin have been working side by side to make Harley-Davidson of Bangkok an authentic experience for riders.

Profile: Redefining the path to success