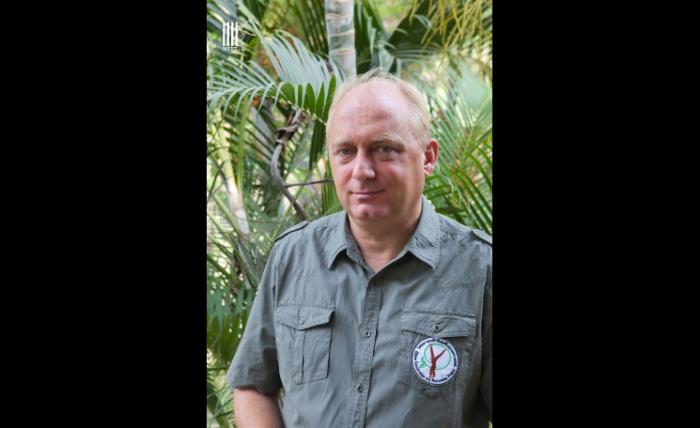 PHUKET: Edwin Wiek, 50, is the founder and director of Wildlife Friends Foundation of Thailand (WFFT).

WFFT is based in Petchaburi and Laos, but Edwin has been involved in several animal rescue cases in Phuket. The latest case is that of Milo, an orangutan that was freed from the Phuket zoo and found abandoned in a forest.

In 2008, Edwin and the WFFT were involved in the rescue of 12 orangutans found in a sub-standard zoo on the island. After many months of campaigning, the orangutans disappeared, only to be found in cages on the highway between Phuket and Phang Nga in February 2009.

Edwin is originally from Holland, where he was serving in the military. He first arrived in Thailand in 1989 to work with a fashion accessories company.

“We had about 200 employees and imported fashion accessories into Thailand. Two years later, I quit this job and decided to start my own company by the name of ESA manufacturing. Things were going well, until I experienced a life-changing incident in 1999,” says Edwin.

“In October 1999, I was driving home late one night from a seminar in Chumphon to my house in Cha-Am, Petchaburi Province. I fell asleep at the wheel and crashed into a tree. I wasn’t even wearing a seat belt. I was conscious the whole time and could feel that I was bleeding. I just left my car there, caught a ride home and crawled into bed. In the morning, my neighbor asked my wife what happened to me, as he had seen my car 20km from Cha-Am in a ditch. That is when they found me asleep with blood on the bed.”

Edwin says that this near-death experience made him reevaluate his life.

“From that moment, I realized that we never know when we’re going to die, so we should do what we love. Personally, I’ve loved animals since I was a child. When I was seven years old, it was a dream of mine to be an animal rescuer, but we all know that in the real world it’s not always possible to do what you dream of,” says Edwin.

In 2000, Edwin decided to sell out his company and use the money to start WFFT. He first started out with two Thai friends by caring for stray animals from temples. Now the foundation has grown considerably, employs more than 124 staff members and operates from two offices – one in Thailand and another in Laos.

WFFT has several different projects, including animal rescue, rehabilitation and veterinary assistance to wild animals in Thailand. It also operates a rescue center and wildlife refuge, including an elephant refuge.

“The more I learn about people, the better I like animals. Animals are very much like humans. They have a life, and they want to be free and comfortable. They need to be taken care of when they are sick, just like we do. I think what we are doing at WFFT is beneficial for society,” he says.

“WFFT has received a lot of support and funds, both within Thailand and from international institutes. I have been travelling around the world to places such as Australia, the US and so on, to inform people of what we are doing at WFFT. The support has been tremendous so far.

“I will keep doing this until I get old, maybe for another 15 years or so. I have earned enough for myself, so I feel it’s important to give something back to society,” he says.

Profile: Sebastien Tronchet – No stranger to the land of smiles