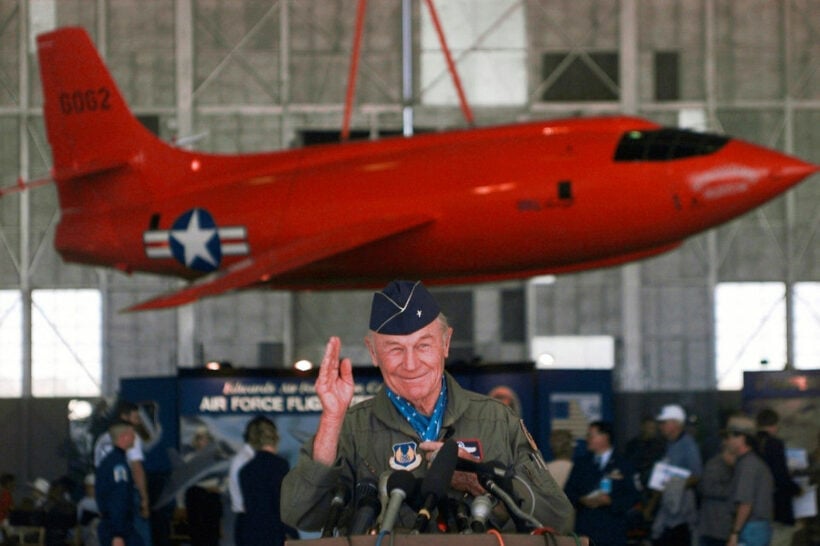 For a time he was the fastest man on earth. He was the first man to travel faster than the speed of sound – about 1,235 kilometres per hour. And he did that in 1947. But Chuck Yeager, the man with “The Right Stuff”, has died at the age of 97. Chuck became one of the world’s most-renowned test pilots after WW2. Yeager tested rockets, experimental crafts and rocket-powered machines.

He was a US Air Force officer and test pilot who broke the sound barrier when he tested the X-1 in October 1947. His second wife, Victoria, announced on Twitter that the World War II flying ace had died on Monday night, US time.

Yeager had been living in Northern California but died in a Los Angeles hospital. His legacy captured later generations as well, being featured in the book and 1983 film, “The Right Stuff.”

John Nicoletti, Chuck Yeager’s friend and ground crew chief said that “It is a sad day for America. After he broke the sound barrier, we all now have permission to break barriers.”

Yeager had been through some physical challenges in recent years and had a fall that led to complications and other issues. 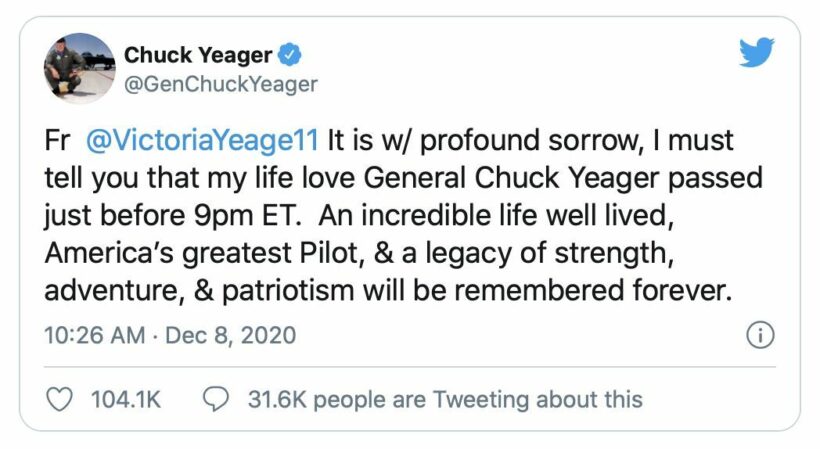 He was born in 1923 and raised in West Virginia. He enlisted in the Army Air Corps at age 18 in 1941. In 1943, Yeager was commissioned a reserve flight officer before becoming a pilot in the fighter command of the Eight Air Force stationed in England.

During World War II, he flew 64 missions and shot down 13 German planes.

Yeager was shot down over France in March of 1944 on his eighth combat mission but was able to evade capture with the help of the French underground. He returned to the US in 1945 and married his wife Glennis, for whom he had named several of his fighting aircraft.

Following the war, Yeager became a flight instructor and a test pilot, working as an assistant maintenance officer in the Fighter Section of the Flight Test Division at Wright Field in Ohio. He was also asked to perform in airshows as well as service trials for new planes. In 1946, Yeager was hand selected to be a student at the new test pilot school at Wright Field.

Here he would be the first to fly the highly experimental, rocket-powered Bell X-1. After months of flights with the X-1, Yeager broke the sound barrier with his aircraft, which he named the Glamorous Glennis on October 14, 1947, over Rogers Dry Lake in Southern California. 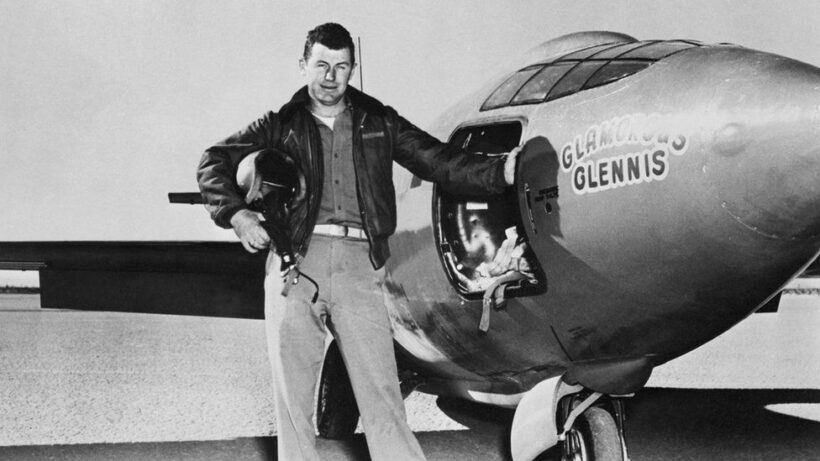 The X-1 reached Mach 1.06 (1.06 x the speed of sound), making Yeager the first man to travel faster than the speed of sound and earning him the title of “Fastest Man Alive.” He would continue to test planes, push barriers and help to plant the seeds of the supersonic age which would come about a decade later.

He became commandant of the Aerospace Research Pilot School where he presided over the development of a first of its kind institution designed to prepare US military test pilots for spaceflight. The program trained the astronaut who would go on to fly in the Gemini, Apollo and Space Shuttle programs.

Throughout the 1960’s, his position in the Air Force took him to the Philippines, Vietnam, Thailand and Korea.

Yeager retired from the Air Force with the rank of Brigadier General in 1975, having flown 10,131.6 hours in some 361 different types and models of military aircraft over the course of his career.

While his official service was over, Yeager continued to be a valued adviser for government and aerospace industry. In 1997, at age 74, Yeager commemorated the 50th anniversary of his milestone flight in the X-1, by flying in an F-15 Eagle.

What an extraordinary career! Chuck Yeager straddled one of the most exciting times in world history when powered flight revolutionised the way we live. Whilst we now take a flight in a plane as an almost ho-hum experience, the planes and rocket-powered machines that were flown by Yeager and his contemporaries were clunky, experimental and dangerous. His skills and grit helped the designers and engineers break through the barriers of aviation to path the way for the aviation industry we have today.

Vale Chuck Yeager, the man with The Right Stuff. 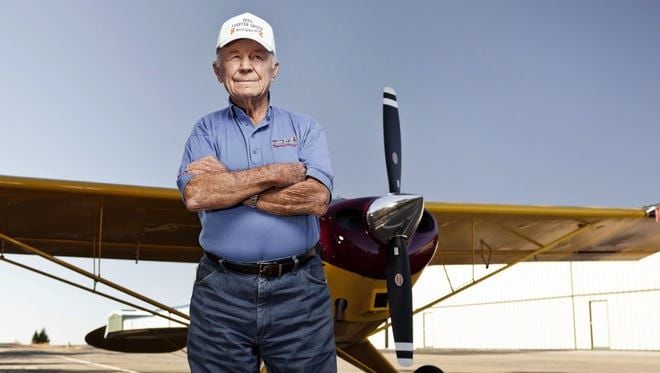