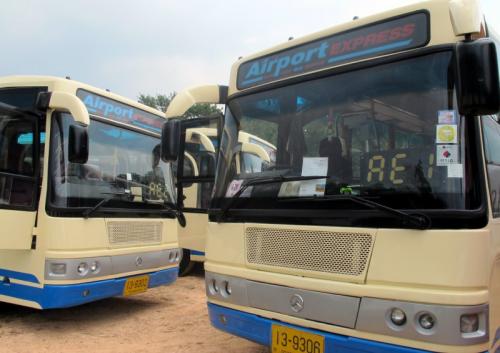 PHUKET: The long-awaited and much supported Phuket Airport Bus Express – marking Phuket’s first ‘hop on-hop off’ bus service from the airport to major tourist beaches along the west coast (story here) – will not be launched this month.

The news came at a provincial transport committee meeting at the Phuket Land Transportation Office (PLTO) this afternoon led by ardent supporter of the new service, PLTO chief Teerayut Presertpol.

The committee agreed “in principle” to approve the new service, but vetoed the launch on the condition that tuk-tuk and taxi drivers be consulted first on whether or not they would accept it.

A gravely disappointed Mr Teerayut told the Phuket Gazette, “Actually, today I expected the committee to approve the PLTO’s issuance of the needed permit to the bus operator, OS Car Rent & Tour, but they didn’t.”

Instead, the committee supported the suggestion by its chairman, Phuket Vice Governor Chamroen Tipayapongtada, that local tuk-tuk and taxi drivers be consulted first before approving any official steps toward launching the new service.

“I am worried that there will be attacks [on the bus drivers],” V/Gov Chamroen explained to the meeting.

“I am especially worried about the tuk-tuk and taxi drivers in Kata-Karon,” he added.

When the Gazette asked whether the provincial government would allow the local tuk-tuk and taxi drivers, rather than the public, to decide whether or not Phuket would have the bus service, V/Gov Chamroen dodged the question, saying only that, “Phuket is still moving forward, but we will move forward cautiously.”

Dates and venues for the public feedback meetings have yet to be set, but it was agreed that such meetings were to be held before May 15, Mr Teerayut said.

The committee will not meet again before that date, he added.