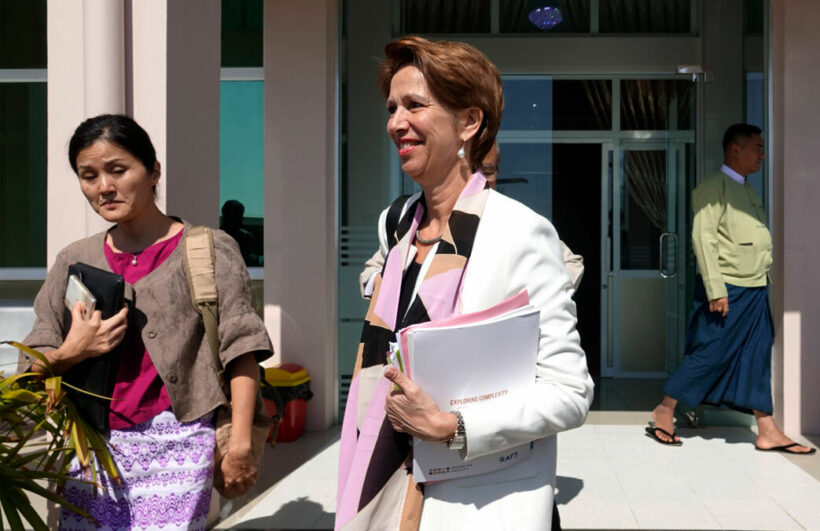 The UN’s special envoy on Myanmar is meeting with Thai Foreign Minister Don Pramudwinai in ongoing diplomatic efforts to find a peaceful solution for the humanitarian crisis in Myanmar.

But Thai officials have put her quarantine ahead of the needs of the Burmese people with Christine Schraner Burgener, who arrived in Bangkok yesterday, having to spend 7 days in ASQ before meeting in person with FM Don. The special envoy received 2 doses of Covid vaccine before her departure to Thailand.

She is visiting Thailand as part of a quick (well, not so quick with the imposed 7 day delay) diplomatic tour around ASEAN nations to “explore possible solutions” to the continuing carnage in Myanmar brought about by the Tatmadaw following a military coup on February 1. Nearly 600 civilians have been killed by gangs of soldiers under orders to crackdown on protesters who insist on a return of the civilian Aung San Suu Kyi government.

In the November general election in Myanmar, the military backed parties only gained 17% of the total vote. Military chiefs say that there was “voting irregularities” despite Myanmar’s independent election commission claiming the vote was “free and fair”.

Christine Schraner Burgener, a former Swiss ambassador to Thailand, has served as the special envoy on Myanmar for 3 years. Her specific mandate from the UN is to “support the reform, reconciliation and democratisation processes in Myanmar, as well as to address violence in Rakhine State and Rohingya displaced persons”.

Thailand’s government whilst calling for a peaceful resolution has held back from more forceful language over the violence in the neighbouring country. The government has also come under fire from NGOs stationed on the border, monitoring the flow of refugees crossing from Myanmar, who claim the government has been doing little to help and, in some cases, just turning the refugees back and refusing them entry.

“We are committed to cooperating and engaging constructively with the international community, including through the UN and ASEAN, in order to find a peaceful solution for Myanmar and its people. We hope that this visit to the region by the Special Envoy can contribute towards possible solutions.”

AFP quoted UN spokesman Stephane Dujarric as saying that the junta in Myanmar has not yet given Burgener a “green light” to visit the country..

With the backing of the UN Security Council, Christine Schraner Burgener says she wants to visit detained civilian leaders, mostly from the NLD ruling party (before February 1, including the Myanmar President Wint Myint and Aung San Suu Kyi.