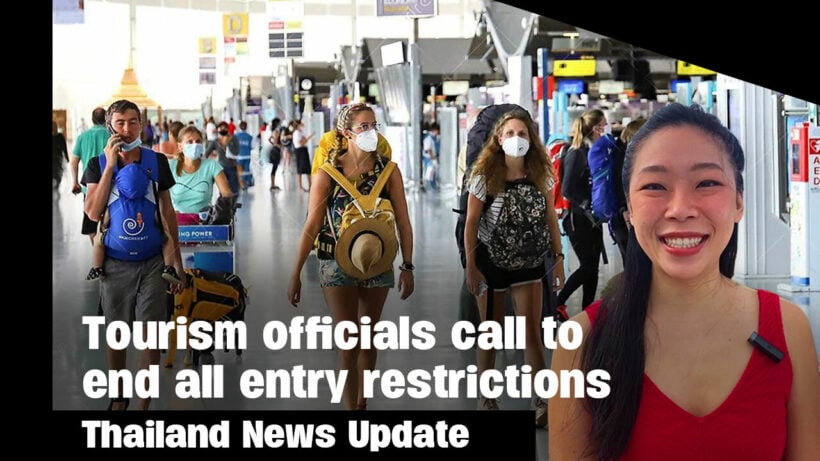 Thailand’s tourism officials want an end to all entry restrictions for vaccinated travellers by June 1. That means no quarantine, no Test & Go rules, no Sandbox zones, no Covid-19 tests. A plan to gradually lift restrictions over the next few months, leading up to the removal of all restrictions by June 1, has been drafted by the Tourism and Sports Ministry. The proposal will need discussion and approval by the CCSA. If the number of daily new Covid-19 infections remains steady during the Songkran holiday from April 13 to 15, well…. April 13 – 17 if you count the weekend… then the ministry will move forward and propose the plan to the CCSA. Under the ministry’s plan, the on-arrival PCR Covid-19 test will be replaced with a rapid antigen test, or ATK, starting May 1. The faster test, with results back in minutes, means travellers will no longer need to book a room at an approved hotel to self-isolate while they wait for their results… a major stumbling block for prospective travellers it seems. If the change in on-arrival testing is approved, and if there is no spike in the infection rate, then the ministry will make another proposal to the CCSA to lift all restrictions for fully vaccinated foreign tourists. There are full details about the plans on thethaiger.com and you can also add your comments at Thaiger Talk.

A total of 32 university students in Thailand’s Isaan region are facing criminal charges for a brutal initiation, or hazing, where a first-year student died after being beaten. Of those students, seven of them have reportedly confessed to using excessive violence against the student and are facing criminal charges of colluding in physical assault causing death and assault. First-year students at the Rajamangala University of Technology Isaan in Nakhon Ratchasima were said to have been taken 19 year old Padyos “Prem” Chonpakdi to a rice paddy field off-campus where he was told they were going to play football. The 19 year old was forced to undress, drink excessive amounts of alcohol, sing and was then punched in the stomach and chest. When Prem lost consciousness and couldn’t breathe, the students took him to the hospital, but Prem died before he arrived. More than 60 people were questioned about the hazing incident by second-year students.
University officials are discussing penalties for the students involved in the incident, such as expulsion for those directly involved.

Checking out the latest on Songkran…. it’s the official Thai New Year and is the largest of Thailand’s many traditional festivals. Known for huge water fights as well as the more traditional water blessing ceremonies, Songkran has been celebrated for centuries and is rich in culture and tradition. But this year the celebrations are going to be somewhat subdued due to the Government’s Covid restrictions. We won’t know exactly where you can celebrate, if alcohol will be allowed, or if you’ll need to wear a face mask…. until a bit closer to the events. We’ll be publishing a full list of celebrations as we get closer to the festival. Over the weekend the Bangkok Metropolitan Authority said that they would be organising official Songkran parties around the city, but there were conflicting details on exactly what you’d be able to do. Other parts of the country will also be organising some sort of official celebrations but there’s no doubt the activities will be more subdued for 2022.

Thailand is heading for another current-account deficit as prospects for international travel into Thailand become less likely as the number of Covid cases globally starts creeping up, the ongoing war in Ukraine, and oil and energy prices soaring. The net-oil importer may post a shortfall of $4.6 billion this year, from a previously estimated surplus of $5.8 billion in the current account. Three of Thailand’s largest banks also expect Southeast Asia’s second-largest economy to post a second consecutive year of deficit for the first time since 1997, saying that the conflict in Ukraine will effect Thailand’s current account given its high reliance on imported energy. They also say there are also potential second-round effects on the way, prompted by the sudden fall of Russian tourist arrivals and a potential increase in global freight costs. The prospects for the baht also look grim as it’s lost more than 3% against the US dollar since Russia invaded Ukraine, with a widening current-account gap and interest rate differences between the US and Thailand Thai tourism officials are also admitting that, without Chinese or Russian tourists, any prospect of a big rise in tourist numbers for the rest of 2022 will be unlikely.

An employee working the night shift at a guest house in Pattaya fell asleep at the reception counter and woke up to find valuables missing from the lobby, which are said to be valued at a total of 160,000 baht. The 49 year old staff member filed a report to police and provided surveillance camera footage showing a tall man dressed in all black with sandals, entering the lobby and grabbing cash and valuables, like gold necklaces. The suspect is still at large. The staff member says the thief ran off with 54,870 baht in cash as well as gold necklaces and rings.

Marc26
10 minutes ago, oldschooler said: here you request & get the immediate maximum solution like a strong antibiotics cocktail jab ! because here you can’t really sue doctors ….. My wife calls that "take a shot" I was…
JamesR
The news item states "...If the number of daily new Covid-19 infections remains steady during the Songkran holiday from April 13 to 15, then the ministry will move forward and propose the first phase of the plan to the CCSA.... "…
oldschooler
3 minutes ago, Marc26 said: My wife calls that "take a shot" I was very sick for days on Samui, I went and "took the shot" and was better in a matter of hours! Exactly . Same with me for…

Freeduhdumb
33 minutes ago, oldschooler said: “ drivel & twaddle”
Bankerman
Love Thailand, love the Thais, love the food, love the weather we returned to UK lat week after 3 months and want to come back again in December, we were quarantined on this last visit and dint want that experience…

Not so fast: Thai epidemiologist questions plans to declare Covid-19 endemic by July