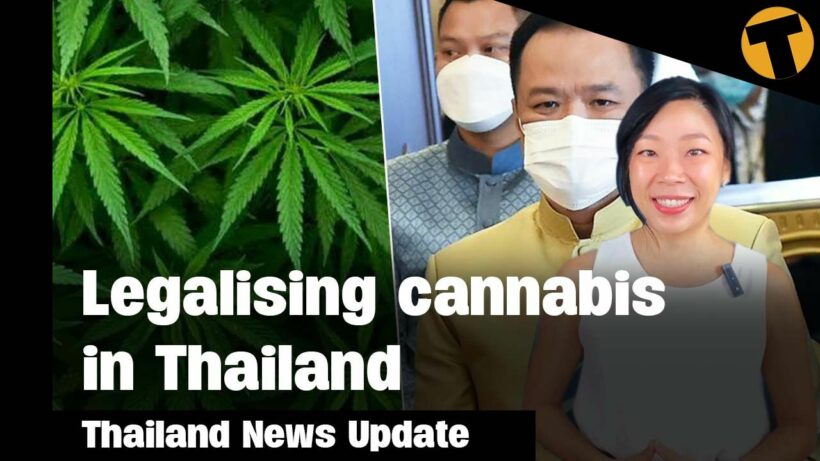 Thailand’s Tourism and Sports Ministry has dusted off its calculator this morning and is predicting there will be at least 8 million tourists coming to Thailand this year. A few weeks ago they were predicting 10 – 5 million arrivals for 2022. Tourism and Sports Minister Phiphat Ratchakitprakarn made the random prediction at the same time he told Thai media he was pushing for the resumption of the Test & Go program next month. He will propose that at a meeting of the CCSA this Thursday.The Test & Go program was part of the Thailand Pass reentry options where fully vaccinated travellers could arrive in Thailand and only have to undergo one night of quarantine in an SHA+ hotel whilst waiting for their, hopefully, negative PCR test results.The Minister said that… The resumption of Test & Go in February still allows enough time to reach 8 million arrivals this year.The Public Health Ministry is proposing to totally delist cannabis from the narcotics list, paving the way for households to grow the plant legally.Cannabis has been in a twilight zone in Thailand for a few years as parts of the plant, and who can and who can’t grow it, have been progressively legalised. But the actual recreational use of marijuana remains a criminal offence… as a Category 5 narcotic substance.But now, Public Health Minister Anutin Charnvirakul says the ministry is taking another crucial step in decriminalising the plant now that a sub-committee on narcotic substances has removed cannabis from its narcotics list.That draft list will be reviewed tomorrow.The Public Health Minister’s Bhumjaithai political party ran in the 2019 general election on a platform of legalising marijuana. Bhumjaithai also control the balance of power in the country’s coalition government.In an effort to take legal steps against merchants selling products at overly high prices, the Permanent Secretary of Thailand’s Ministry of Commerce says he will chair ‘war rooms’ to combat the higher prices. The director-general of the Internal Trade Department under the Commerce Ministry says the ministry has requested manufacturers to freeze their prices as long as possible to lessen the burden on consumers. He added that manufacturers who raise their prices must now provide details of their increased production costs. The ministry plans discount campaigns and low-priced schemes, with discounted products such as pork, chicken, and eggs made available at department and convenience stores, as well as fresh markets, mobile grocers, and other easily accessible places.Thailand is seeing a sharp spike in prices for common products, particularly on meat such as pork. Things like petrol and LPG have also risen sharply over the last year.Apparently, one million people want to expel Amnesty International from Thailand. A spokesperson from the Prime Minister’s office says he’s collected one million signatures in his campaign to withdrawal the non-profit organisation’s operating license.The vice minister, whose nickname is “Rambo Isaan,” accuses the NGO of being a threat to the country. Amnesty International Thailand has been a vocal advocate for human rights during the crackdown on the pro-democracy movement, calling on an end to police violence on protesters and for detained protestors to be released.The junior minister is pushing for a bill that will require NGOs to reveal their sources of financial support, both local and international, among other financial details. It also demands that NGOs not organise activities determined to undermine national security or create conflict in Thai society.According to a poll by NIDA over the weekend, some 52.4% of respondents agree that NGOs should disclose their funding sources.Amnesty has faced threats in Thailand in the past. Police investigated it last November after a request by a network claiming it undermined security. To some regional headlines… and Indonesia is building a new capital… because Jakarta is sinking. According to Indonesia’s President Joko Widodo, the new capital will be built in East Kalimantan Province on the island of Borneo with the name “Nusantara,” which translates as “an archipelago nation.” The new capital is around 2,000 kilometres northeast of Jakarta and will also provide land for foreign embassies and representatives of international organisations to relocate their offices to the new capital within 10 years of the relocation beginning.Jarkata will remain the country’s financial and commercial centre despite the city’s chronic traffic, pollution, overpopulation, and coastal flooding issues, as well as the need for a new economic driver away from Java for good reason.Jakarta has been sinking at a rate of 2 to 10 centimetres per yearbetween 2019 and 2020.The civil aviation regulator of Malaysia has allowed the entry of two new airlines despite the fact that the industry has been reeling from the catastrophic impact of the Covid-19 pandemic.According to the Malaysian Aviation Commission, the newly founded ultra-low-cost carrier MYAirline is about to begin its operations soon as it has been granted an airline service licence. A new Johor-based airline, SKS Airways, was given their ASL on December 22 last year. The 2 new airlines plan to operate passenger and cargo services similar to those offered by the existing Malaysia Airlines and AirAsia Group.If you’re in Singapore, get out your camera. The Southeast Asian country has been named the most “Instagrammable” place in the world by the English publication Big 7 Travel. The publication noted that Singapore has many Instgrammable spots “from the renowned Supertree Grove at Gardens by the Bay to the vivid kaleidoscope of street art via Haji Lane.”The publication noted… in addition to permanent gems, since Singapore is one of Asia’s art hubs, there’s almost always a unique exhibit going on, perfect for those “wow” pics. Boracay, Philippines, followed in second, followed by Oahu, Hawaii, in third. Paris, Istanbul, Turkey, and Dublin, Ireland were among the other cities on the list.

Goondu
As always, it is a pleasure to listen to Ms Naty reading the news; her crystal clear dictation of well written copy far surpasses the mediocrity I normally suffer, as served up by the major media outlets in California. Kudos …

Vince
@Goondu I prefer Natty to Wally George any day. He was always screaming, and I think he wore a wig.