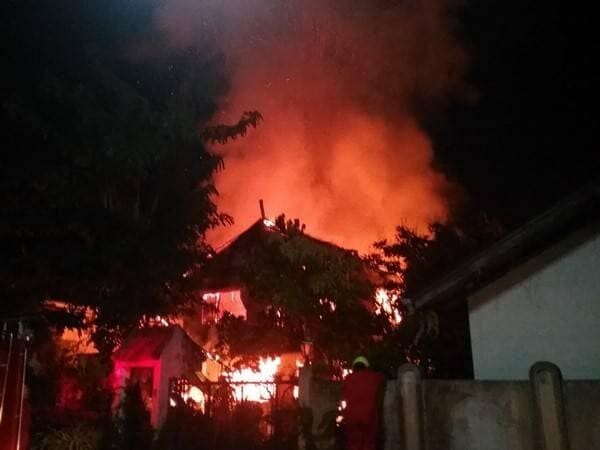 The body of a 63 year old German man was found hanging on a wrought iron fence and his house was on fire. Police suspect the incident is a suicide, but are still investigating.

The firefighters were summoned to Kanchanaburi Villa Housing Estate in the Tha Makham subdistrict of Muang this morning. Ten fire engines from the municipalities of Muang, Tha Makham, and Pak Phraek were dispatched to put out the fire that broke out at a two-story house around 3:30am, according to authorities. The fire was extinguished in roughly an hour.

Neighbours told police that they heard three or four loud explosions from inside the home and walked outside to find the house on fire. Firefighters and police discovered two 15-kilogram gas canisters on the second level, each encircled by four charred car tyres. First responders speculate that the man had set fire to them with the intent of burning down the house before hanging himself. But the investigation is still ongoing and his body was sent for a post-mortem examination to determine the cause of death.

The man was identified as Uwe Albrecht. Reports say he may have lived with his wife, a Thai national, at the home for the past decade. Reports say a distressing message was spray-painted inside of the home, mentioning a 21-year relationship.