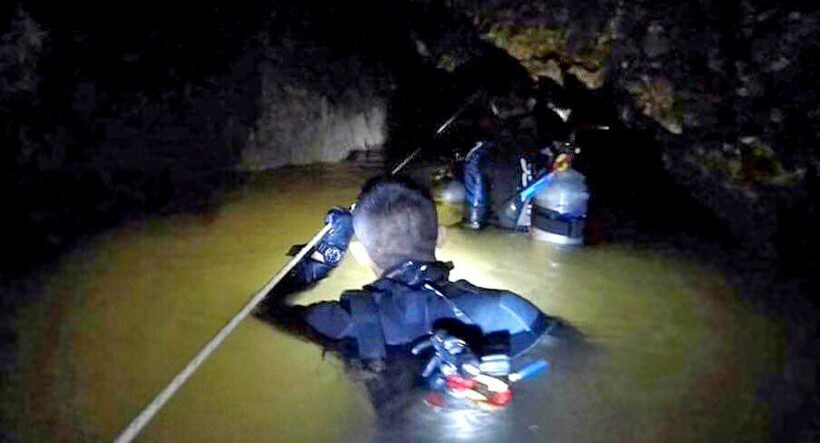 Associate Professor Ariya Aruninta from Chulalongkorn University in Bangkok is warning that the focus on evacuating the trapped 13 by drying the cave was unrealistic and very risky.

Draining water out of the Tham Luang cave is an impossible mission, she claims, even as the rescue operation makes headway and pumping water from the flooded cave has been considered the most important challenge to rescue the trapped footballers.

Aria says it’s impractical to control the inflow of water into the cave system or effectively pump the water out, especially during the rainy season. Ariya pointed out that it was not just the floodwater inside the Tham Luang cave system that the rescue team is dealing with, but the entire subterranean aquifer system of the whole mountain range.

“The mission’s water-draining capacity cannot match the enormous volume of water flowing from the mountain during the rainy season,” she said.

“The rescue team has already faced a difficult situation. The rainy season has just started and the rainy weather will unleash its full power during the four-month period from now.”

She explained that the Tham Luang cave is a part of a limestone mountain ecosystem and when it is raining on the mountain, the water will be absorbed into the subterranean aquifer system through infiltration and later spring out as streams and rivers. She emphasised that the cave is also part of a vast underground water system. She said the plan to evacuate the footballers out of the cave by teaching them to dive through the submerged cave was a very dangerous idea, because the water level in the cave can rise very rapidly without warning from heavy downpours on the mountain above.

Ariya suggested that instead of fighting a hopeless battle against nature, the rescue team should focus on finding safer methods to get the team out.

Meanwhile, Chiang Rai Governor Narongsak Osotthanakorn said the water drainage operation was the most crucial task before the rescue team at this moment, as the lower the floodwater in the cave the higher the chance to get the stranded footballers out of the cave safely.

“We are now focusing on continuing the well-organised water drainage operation, and at least maintain the current water drainage capacity in order to prepare for more rain,” Narongsak said.

“So far the operation to reduce floodwater inside the cave has been satisfying, as the water level is slowly but continuously receding at around one centimetre per hour.”

Maj-General Chalongchai Chaiyakham, the deputy commander of the 3rd Army, also disclosed that the rescue team had successfully drained up to 128 million litres of water out of the cave system. Chalongchai said the effort to lower the water level in the cave by pumping out groundwater in the area had already removed up to 350,000 litres per hour from the subterranean aquifer system.

Additionally, two streams to the South and the North of Doi Nang Non Mountain, Haui Makaeng and Huai Nam Dan, were also diverted through the cooperation of the local people and related agencies, as per the suggestion of Thailand’s prominent geologist Chaiporn Siripornpibul in order to curb the water inflow to the cave system through many stream sinks along these streams.

Chaiporn, who went to Chiang Rai to examine the streams, said according to his estimates up to 70 per cent of the water in these streams flow into the cave system through many cracks and sinkholes along the natural course of the streams, so he proposed the construction of weirs over these streams to stop the water flowing into these stream sinks.

“The water diversion at Huai Nam Dan is very successful, as we can divert up to 50 per cent of the water inflow or 13,000 cubic metres of water through the stream sinks,” he said.