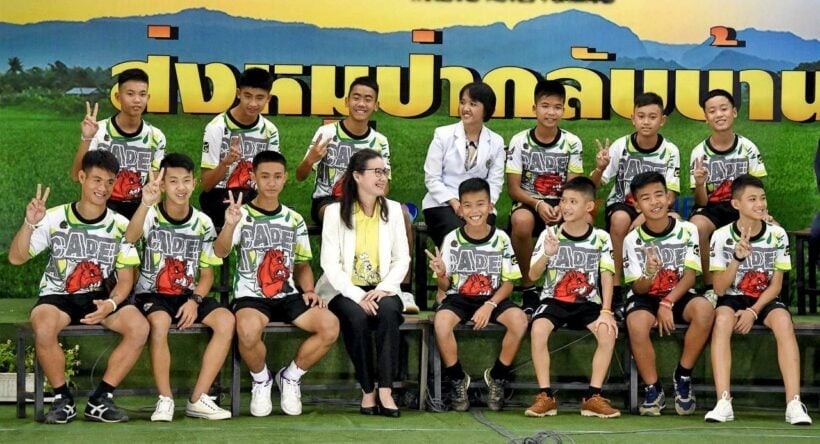 The 12 Mu Pa teenage footballers and their coach planned visit the Tham Luang caves on June 23. They arrived around 4pm and ventured inside with a plan to spend about an hour exploring. They were meant to be out by 5 pm.

18 days later the last of them emerged after a ‘miraculous’ (their words) rescue involving hundreds of highly skilled divers and specialist cave-divers.

Last night they shared some of their stories in a controlled, but candid, exchange with media. They shared the stage with the Thai doctor who stayed with them from the day they were found until the last footballer had been sent back to the entrance to the cave. There was also three Thai Navy Seals disguised with ‘gangster’ dark sunglasses, the new Chiang Rai Governor, supervising Doctor from the Chiang Rai hospital and two child psychologists sharing the stage with them.

They started by entering the room kicking around a few soccer balls and meeting up with their other team mates from school and the Mu Pa Football Academy. The team unanimously credited the leadership of their 25 year coach Ekkaphol Chanthawong or ‘Aek’ with helping them get through the ordeal.

The young survivors gave vivid accounts of their trip to the cave, how they ended up trapped by sudden flooding and the crucial role played by their older coach in maintaining their positive mind-set and hope despite their predicament.

They recounted how they managed without foods for 10 days and how they were drinking water dripping from the cave walls. They ended up waiting on a dry ledge at the spot known as Nern Nomsao before they were discovered by a team of British divers.

Aek, speaking calmly and showing a maturity belying his 25 years, said they didn’t take any food into the cave because they only intended to be there for an hour and depart before 5 pm. He said he had to bring Titan to an evening class. Earlier media reporting speculated that the team went inside the cave to celebrate the birthday of one of the other team members was incorrect.

Aek was the one who tried to swim out of the flooded tunnel through which they had entered but had to retreat back inside because the tunnel was already fully flooded.

The team spoke about trying to find alternative routes deeper into the cave in attempts to get out, but finally gave up the idea, fearing that it might lead them to an even more perilous situation. Finally, they decided to shelter at the Nern Nomsao ledge which is about 400 metres from the other raised ‘beach’ area called Pattaya Beach.

The team related stories how they took turns using stones to dig holes in the cave and Thai Navy Seals confirmed that they’d managed to dig as deep as 4 metres at one spot. The boys said they would fill their stomachs with water before climbing up the ledge to continue smashing the cave wall.

Thai PBS reports that it was the boys and their coach who decided which of them would be extracted first, not the SEALs or the rescue co-ordinators.

“We decided that the ones whose houses are far away from the cave should leave first. They should go home on the bikes as quickly as possible to tell their families what happened and to get help,” said Aek. The team obviously had no idea at all about the commotion happening outside the cave.

Just about all of the young survivors said that they would study hard, try to join the Navy SEAL or wanted to become professional soccer players. The English-speaking 14 year old Adul, a leading sportspersons and student at his school (and almost as tall as his 25 year old coach), described the team’s surprise when they were discovered. He says some members heard some talking so Coach Aek told them all to be quiet. They went straight down to the water and surprised the divers with their ‘Hello’.

What followed is surely to be made into books, documentaries, Hollywood and Thai movies.

The boys say they never gave up hope of seeing the light of the day again but considered their rescue to be nothing short of a miracle.

Thai citizenship likely for one of the Mu Pa team