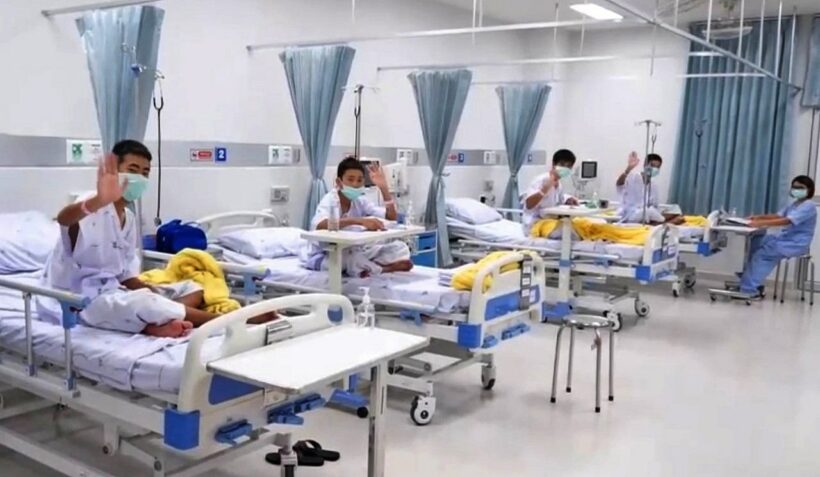 The global attention drawn to the dramatic rescue mission has shone a glaring spotlight on the 12 young footballers from the Mu Pa Academy, making them unwitting public figures. Psychiatrists are stressing that the boys should draw on their own personal strength and support from their families to avoid becoming tainted by fame.

Child psychiatrists are advising that the team members rescued from the Chiang Mai cave be left alone to get back to normal, warning that fame and being granted special privileges could cause lasting harm.

Dr Benjaporn Tuntasood, a child psychiatrist at Manarom Hospital who administers the “Kendekthai” Facebook page, which focuses on child psychology, said it was important to ensure the boys are allowed the privacy to grow up normally.

The admiration and privileges typically bestowed on public figures could harm their mental development and disrupt their recovery following the drawn-out trauma in the cave, Dr Benjaporn said.

“What will heal these kids best is helping them return to normal lives as soon as possible amid the warm hugs of their families,” she said.

“Too much public attention and society’s high expectations will only increase the pressure and stress for the boys, who are already in a weakened mental condition. They’ve just survived the horrific situation of being trapped in a dark cave without food for nearly two weeks.”

Benjaporn urged the news media and people in general to avoid showering the youths with too much attention and setting expectations too high. They can’t be expected to grow up to be good adults just because so much effort went into their rescue, she said.

They’re just ordinary adolescents and teenagers and should be left alone to pursue the same normal lives they enjoyed before getting trapped in the cave.

Read an editorial on this matter from The Thaiger HERE.

The “gifts” are being offered, though. Naresuan University is ready to give the boys, once they’re old enough, full scholarships all the way to doctorate level. They were invited to watch Sunday’s World Cup final in Moscow as guests of Fifa. Their doctors said that was impossible, but a private firm in Doha has proffered seats at the 2022 World Cup in Qatar.

Some of the boys’ countrymen objected to such offers on social media, saying it was unfair that the same generosity wasn’t being shown to those who made the dangerous rescue mission a success.

Dr Jiraporn Arunakul, a child psychiatrist with the Faculty of Medicine at Ramathibodi Hospital (Mahidol University) deemed it inappropriate to shower the boys with rewards because they were only the victims of a natural calamity. They’d already earned the greatest reward possible – surviving and being safely returned to their families, she said.

Jiraporn emphasised that the youths are at a crucial stage in their development. Giving them too many opportunities and shortcuts to success would destabilise their later lives, she warned, just as the survivors of the mining disaster in Chile, who were all adults, ended up suffering due to their fame.

“The most precious reward everyone can offer these brave teenagers is allowing them to get back to their normal lives,” Jiraporn said.