Mr. Don Pramudwinai, Minister of Foreign Affairs, delivered a speech at the opening of the ASEAN Women Entrepreneurs Network Meeting, one of the important events of ASEAN, focusing on strengthening the economy and enhancing the role of women in order to achieve equality in the region.

Many countries in ASEAN have gradually succeeded in achieving this change and ensure the contribution of women gets more attention at every level. It is necessary to focus on sustainable development for the benefit of the next generation. Thailand, as the Chair of ASEAN in 2019, has resolved to address all issues including accessing markets through digital channels; supporting access to financial services and enhancing skills for small and medium enterprises and small-scale entrepreneurs, along with women entrepreneurs and fellow workers in a sustainable manner.

At The Athenee Hotel in Wireless Road, Bangkok, representatives of member states attended a meeting of the Permanent Representative Committee of ASEAN yesterday ahead of the 34th ASEAN Summit this weekend.

Meeting rooms have been allocated for conferences of ASEAN leaders in attendance, foreign and economic ministers of the bloc, and representatives of business councils, Chambers of Commerce and the industrial sector. The main conferences will be held today.

A Media Centre set up at the Grand Centre Point Hotel, Bangkok, accommodates members of the regional news media.

A bit of ASEAN history…

The Association of Southeast Asian Nations, or ASEAN, was established on August 8, 1967 in Bangkok, Thailand, with the signing of the ASEAN Declaration (Bangkok Declaration) by the Founding Fathers of ASEAN, namely Indonesia, Malaysia, Philippines, Singapore and Thailand.

At the Laem Thaen, Bang Saen Beach, five statesmen from five neighboring lands huddled together, hammering out the final text of a short and simple document containing just five articles which marked a new beginning for their countries in the region.

They sat down together to make history on August 8, 1967, in the main hall of the Department of Foreign Affairs building, Bangkok. Their speech and messages went far beyond, for they represented their countries and the dreams and aspirations of the five hundred million people who called them homes.

“We cannot survive for long as independent but isolated people unless we think and act together and unless we prove by deeds that we belong to a family of Southeast Asian nations,” Tun Abdul Razak, Deputy Prime Minister of Malaysia. 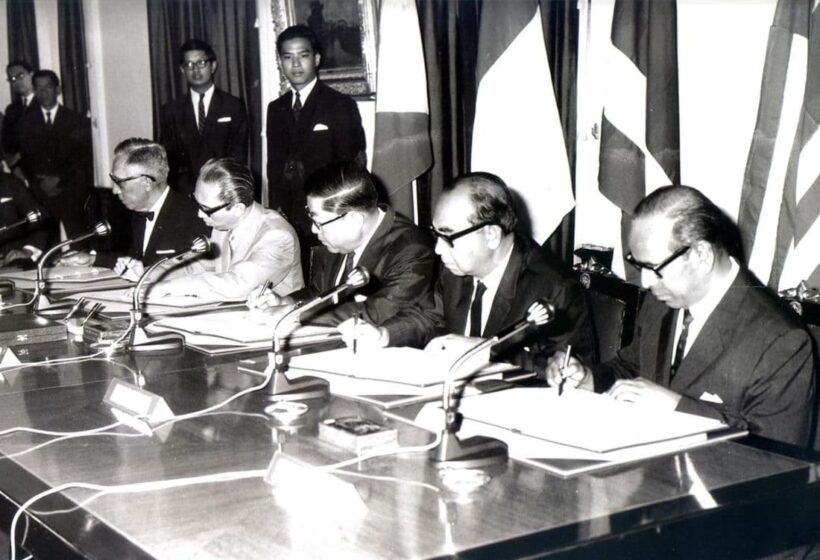