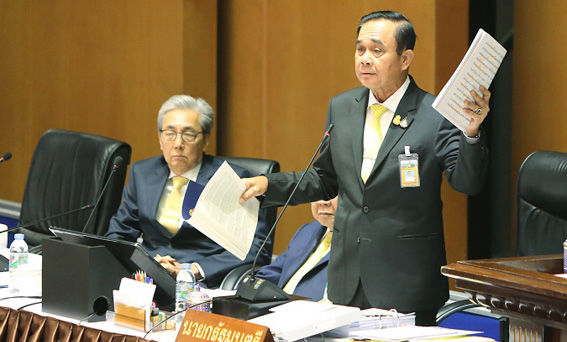 One day down, another today. Thailand’s PM had his first day in a parliamentary setting and, despite taunts and barbs being thrown at him in true Parliamentary style, he stood firm.

Sometimes working off-script and at other times visibly annoyed, PM Prayut Chan-o-cha barrelled through the formalities with a few “settle downs” coming from his right-hand man, deputy PM Prawit Wongsuwan.

The Thai Prime Minister delivered the new government’s policy statement as the opening event on the first day’s sitting of Parliament. He readily admitted he was new to a parliamentary setting and barged through tempers and emotional responses coming from the opposition benches. He was fierce and determined in his first display heading up Thailand’s first elected government since the coup in 2014.

Here’s a few of the highlights…

• PM Prayut started off-script, stressing what he considered to be important in his first speech. He told parliament that his government was considering implementing the policies that both the coalition and opposition parties had proposed and urged patience for the roll out.

• Opposition MPs took turns raising objections, demanding that parliamentary regulations required the premier to read out the policy statement word for word. House Speaker Chuan Leekpai agreed with the objections and asked the PM to stick to the script.

“There’s nothing in the policies. It’s vague. It’s lacking in clear vision.”

• Wan, during part of the debate time, made a colourful outburst claiming that Prayut had revealed to him on the day of the military take-over in 2014 that he had been plotting the coup for three years. Wan quoted Prayuth as saying in a meeting with him and other government officials moments after the general announced the takeover on May 22, 2014. Wan said couldn’t have faith in Prayut’s pledge at the parliament today to uphold democracy.

“How can a coup maker uphold democracy? You tore the constitution to pieces. That’s definitely treason.”

• On the issue of the Government stocking up on arms and military weaponry, PM Prayut said it is necessary to buy weapons that can be used efficiently.

“As for graft allegations, go find evidence and sue. Several committees were set up to oversee purchases.”

• Future Forward Party secretary-general, Piyabutr Saengkanokkul, said that the party upholds the royal institution as much as anyone else, fending off some accusations that FFP have been undermining the constitutional monarchy.

“It is wrong to accuse those who hold different views of being disloyal to the country.”

But the PM finally ran out of patience late in the evening when the leader of Seri Ruam Thai Party, questioned his qualifications for the office of premier.

Prayut walked out of the house, forcing a 10 minute break.

Day Two in the first sitting of the parliament today.