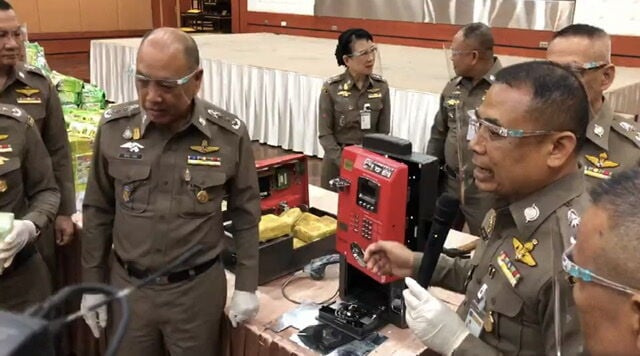 Police found 500 kilograms of methamphetamine and other illegal drugs hidden in 154 phone booth call boxes at a home in the Isaan province Khon Kaen. Officers from the Narcotics Suppression Bureau raided the home yesterday and arrested 6 people who are suspected of being members of a major drug trafficking operation in the Northeast.

Along with half a tonne of crystal methamphetamine, police found 1.2 million speed pills, 200 ecstasy pills and 1 kilogram of ketamine, all hidden in the phone booth call boxes, according to deputy national police chief Manu Mekmok.

Police suspect the packages containing the call boxes full of drugs were ready to be sent to Southern Thailand. Police say the alleged drug traffickers used a similar tactic in the past, concealing drugs in car engines, exercise equipment and loud speakers, then shipping the packages to the South.

The 6 suspects were arrested on charges of possessing illicit drugs.