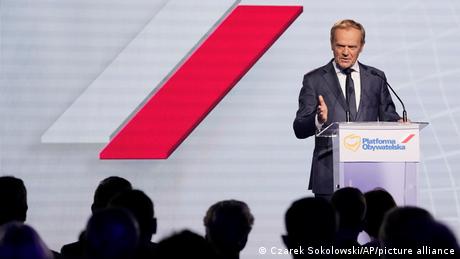 Determined, confident, combative and goal-oriented — that’s how Donald Tusk presented himself at his comeback appearance in Warsaw on Saturday. A man who knows what he wants, which is to defeat the right-wing populist Law and Justice Party (PiS), led by Jaroslaw Kaczynski, which has been in power since 2015. The next parliamentary election will be held in just over two years. “Today, evil reigns in Poland and we want to fight it. That’s reason enough, you don’t need any other justification,” Poland’s former prime minister said.

Now 64, Tusk was clearly in his element facing members of the party he now heads and which he co-founded in 2001, the center-right Civic Platform (PO). He received standing ovations from a beaming crowd, whose relief was written on their faces.

He came across more like a therapist or a coach than a politician promoting a program, political observers said of his appearance. He urged party members to have faith in themselves despite losing several elections. A victory over the PiS is possible, he told them, describing the current Polish government as a “parody of a dictatorship.”

He also stressed that Poland is more isolated right now than it has been in decades, and that this needs to change. He also declared that PiS should apologize to the Polish people. Tusk’s speech echoed the words of US President Joe Biden, whom he referred to as a longtime friend, and who recently announced that “America is back.”

But political scientist Anna Materska-SosnowskaIt told DW that criticizing PiS and styling his Civic Platform as the anti-PiS party won’t be enough. Still, she believes that if Donald Tusk succeeds in taking the next steps and winning people over with a solid program, he can achieve a lot. Politics is not that different from soccer, she said, adding that one person alone does not win a game — as passionate soccer fan Tusk is well aware.

Tusk’s party is no stranger to power struggles either. The mayor of Warsaw, who ran against President Andrzej Duda in 2020 and fared well in the polls, had himself been hoping to be appointed leader of Civic Platform. “Rafal Trzaskowski looked like a boy who got a slap on the wrist,” said Materska-Sosnowska. The question is whether key party members will put aside their egos and seek to compromise, she said — “neither can go it alone, only united do they stand a chance.”

A politician who polarizes

Tusk might face a uphill battle convincing Poland’s voters. When word leaked of his comeback ambitions, a survey showed that 60% of the people interviewed did not want their former prime minister to return to domestic politics. That comes as no surprise to Materska-Sosnowska. “Over the past years, he has been maligned, he is the arch enemy of Kaczynski, and he also made mistakes as a party leader and prime minister,” she said. His perceived lack of empathy is taking its toll, she added. “He is a politician who polarizes: he has loyal fans, and fierce enemies.”

After his successful career in Brussels, Donald Tusk could have chosen a more comfortable next move than reentering the political fray. At a press conference the day after his comeback speech, Tusk said that in the two years leading up to the elections, he intends to visit every community in Poland, and is willing to face difficult questions. He also pledged to answer questions from journalists, addressing the Warsaw media in a more familiar fashion than usual. He announced he would give up the EPP presidency in order to be concentrate one hundred percent on Poland.

Pillar for the opposition?

In the run-up to his return, many people in Poland wondered why Tusk was taking on this challenge. “He doesn’t have to do anything, but he can do anything he wants,” Anna Materska-Sosnowska said. After all, she added, Tusk no longer needs to prove anything. In 2007, he defeated Jaroslaw Kaczynski’s first government. He only lost in the runoff for the 2005 presidential election against the PiS leader’s late twin brother, Lech Kaczynski.

Even Tusk’s close confidante Bogdan Borusewicz, who served as marshal in the Polish Senate for ten years, had no idea the ex-prime minister would want to return to Polish politics. But he welcomes the decision, Borusewicz told DW, adding it gives hope there may be a way out of the country’s “dead end street.” Tusk, he said, could be a “pillar of support” for the entire Polish opposition.

Reactions from the PiS camp and pro-government commentators seem to confirm Borusewicz’s assumption, as PiS politicians sharply criticized Tusk, predicting an end to the country’s social benefit programs, including the “500+” child benefit.

“PiS has done everything in its power these past years to badmouth Tusk, calling him Germany’s lapdog, someone who answers to Merkel, someone who has no independent position,” said Borusewicz, who played a leading role in the Solidarnosc era and who, like Tusk, lives in a the Tricity metropolitan area around Gdansk — a liberal, cosmopolitan stronghold of PiS opponents.

Ahead of the 2020 presidential election, Tusk said he refrained from running because a challenger to PiS incumbent Duda should be unencumbered by “heavy baggage” and past “unpopular decisions.”

Tusk’s seven (2007-2014) tumultuous years at the helm left many voters with the impression he lacked social sensitivity, not least due to his decision to raise the retirement age, which PiS lowered again. Tusk admitted that was a mistake, saying the pension reform should have been made “voluntary.”

This article has been translated from German