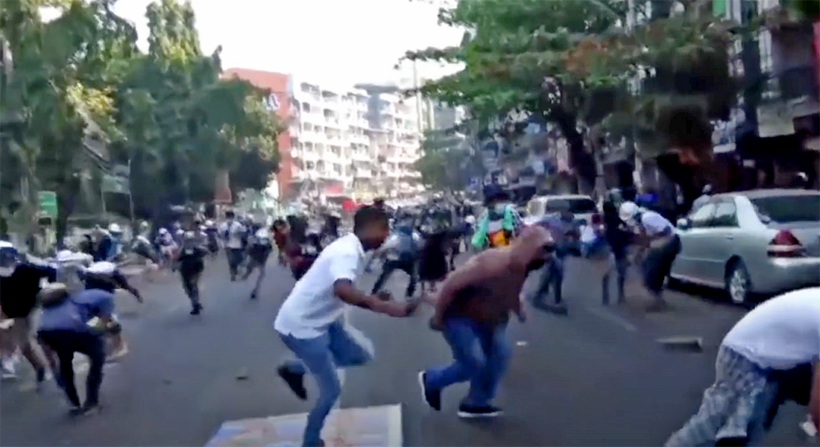 Myanmar’s most prominent ethnic and political rebel groups are throwing their support behind the country’s anti-coup protesters. Yesterday, 10 of the groups convened a conference call to discuss the military leaders killing protesters and citizens. Nearly 600 Burmese citizens have now been killed in the violent crackdown that started after the February 1 coup that ousted the government of Aung San Suu Kyi.

Their meeting, and the joint push of the major opposition groups to oppose the military government, is a major setback from any immediate peace in the country. The Tatmadaw, the Burmese military, has sought to quell dissent and protest around the country but is being met with mass protests and civil disobedience campaigns.

Some public servants and staff in the banking sector are refusing to work as silent protests against the military’s violence. And after the military ordered communities around Yangon to clean up their rubbish on streets they were met with a campaign of locals dumping their rubbish at main intersections around the country. The resistance, despite being fractured and mostly unable to communicate because of widespread wi fi shutdowns, are making the country ungovernable.

Last week, the Burmese military declared an April-long ceasefire with the country’s well armed ethnic groups. But they also included caveats in their ceasefire offer that allowed them to keep suppressing anything they call ‘terrorist’ activity, including “lethal force against anti-coup demonstrations”.

Arrest warrants have also issued for 40 popular celebrities and social media influencers as authorities accuse them of spreading misinformation “that could cause mutiny in the armed forces”. Most of them are being sheltered by the major ethnic militia who are opposing the Myanmar military coup.

But the loose coalition of opposing ethnic groups yesterday said the ceasefire must stop any violent action towards protesters. The 10 groups are now signatories to a nationwide ceasefire agreement that was originally brokered by the previous civilian government which attempted to negotiate an end to the ethnic militias’ decades-long armed struggles for greater autonomy.

Here is an assessment of the current situation from The Thaiger…

In a statement from the online meeting, the 10 groups, despite their previous differences, say they “firmly stand with the people who are demanding the end of dictatorship.”

The Karen National Union seized an army base in eastern Karen state, near the Thai/Myanmar border, killing 10 Burmese army officers. Then, between March 27 to 30,  the military retaliated with air strikes, forcing thousands of Burmese citizens to flee across the Thai border. The KNU, well organised and armed with an estimated 8,000 soldiers, have been sheltering vocal anti-coup protesters.

Despite the Myanmar army chiefs insisting there was only 1 airstrike there has been multiple video sources indicating multiple attacks.

Now the coup leaders are shutting down Myanmar’s mobile data and wi fi services across the country, imposing internet blackout that have been gradually rolled out since the start of February, in an attempt to throttle the country’s communications.

International media are still trying to get their reports out as the courier their completed reports to border areas for upload to host media organisations.