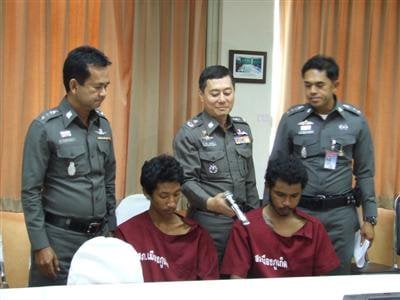 PHUKET: Two young men carried out at least 10 muggings using a gun-shaped cigarette lighter before their arrest in Phuket on the morning of April 25, according to Phuket Police.

Chaiyut ‘Daeng’ Sangthong and Umpon ‘Bao’ Meelert, both 21, were picked up by Phuket City Police officers after allegedly robbing a couple the night before.

The suspects allegedly attacked Chitpon Sinchai and Orn-anong Jakkrapan Na Ayuthaya at the entrance to Soi Phanieng in Rassada around 3:30am on Sunday.

The couple were on their way home to Jira Mansion on the same soi after attending a wedding party at The Metropole hotel in Phuket Town.

One of the suspects hit Mr Chitpon on the head with the lighter, police said. They stole 1,000 baht, a mobile phone and the couple’s room key from Ms Orn-anong before riding off on a motorbike.

Police arrested the suspects near Samkong Temple in Rassada the next morning. They were found in possession of a Jira Mansion room key, police said.

The pair were shown to the press at conference at Phuket City Police Station at 10am the following day.

“People who have been robbed before and want to identify them can come to Phuket Provincial Prison, where they are being held,” he said.

Maj Gen Pekad said the pair looked like the kind of youths who caused trouble for other people.

“Police always find illegal things on men who look like this,” he added.