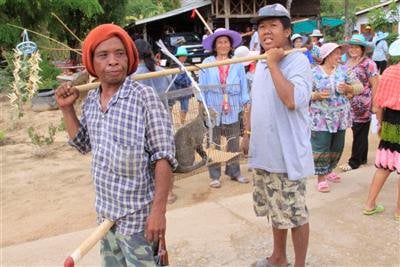 PHICHIT: After suffering from the worst drought in a decade, some 200 villagers in tambon Don Seua Leuang resurrected an old local tradition in which female cats are paraded around the village and doused with water in the hopes that their screams will induce the rain gods to release their bounty.

The ritual took place at 2pm on June 5 in the small rice-farming area of this tambon, located in Pho Prathap Chang District.

Nang Boontham, 53, said there wasn’t enough water to plant her 50-rai paddy and that she feared the annual flooding of the low-lying area would be worse this year if villagers didn’t get their paddy production underway soon.

Don Seua Leuang Tambon Administration Organization President Wisan Junthong said this year’s drought was especially bad because the village was not receiving extra water from the Ping River in neighboring Kamphaeng Phet Province, as usual. The canal usually used to channel water to the area was currently being worked on, he said.

Normally villagers in the area would begin planting as soon as rains arrived after Royal Ploughing Day in early May. When June arrived without rainfall, the villagers decided to hold the cat parade.

The ritual is one of many folk beliefs used by villagers in the North and Northeast to induce rainfall. The most popular involve firing homemade rockets into the sky.