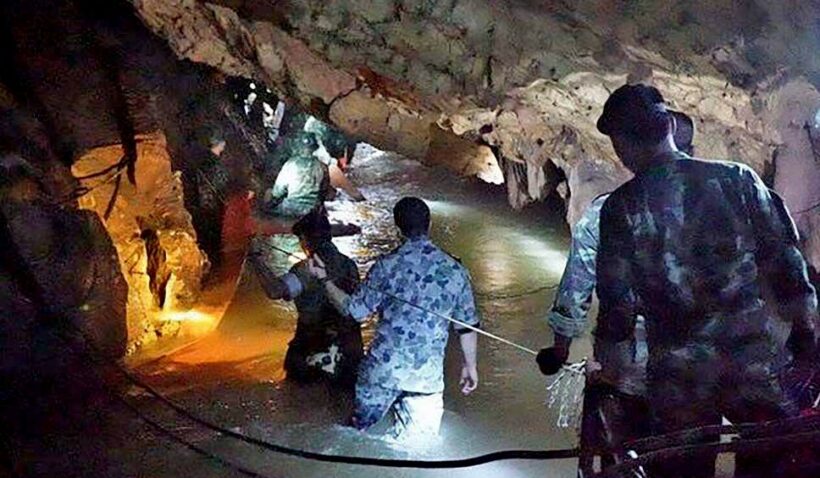 Whilst rescuers are tackling the tricky task of removing the 13 trapped footballers from the Tham Luang caves, the Governor of Chiang Rai has shared some of the latest thinking and strategies from the divers and rescue team.

Doctors say that the 13 survivors are not physically ready to be taken out after their extended stay in total darkness for almost 11 days (so far) since June 23. There was no food and only rain water seeping through the cave ceiling.  The SEAL medical team is now feeding them special energy-enhancement food, such as power gels, before they can be fed with regular food to build up their strength and health. Still, rescuers are trying to measure the urgent need to get them out before the monsoon rains come again, against their physical preparedness.

The rescue route is quite rough and about four kilometres long from where they are now to the cave entrance.  Some sections of the passage are shallow and can be waded through while others are flooded with strong currents (one of the divers said it was like swimming against the current in the Colorado River). Other sections are narrow with steep walls.  Even the SEAL teams are taking about six hours to get in and out.  Efforts to drain more water out are under way with more groundwater wells to be dredged to drain more water out of the cave. Water from the outside the caves continues to flow into the cave despite attempts to block it and diverting it away from the caves.

The first option remains to get the survivors out through the cave entrance.  This means that the survivors will have to dive through the flooded passage ways.  Since all of them have no basic training in diving, let alone cave diving or swimming, they will have to go through a  diving crash course and get used to a full-face diving mask that they will have to wear. Survivors will have to dive with scuba equipment through the flooded passage ways if they are to come out they way they went in.  Oxygen tanks are being placed every 25 metres on a specially installed rope from the mound where they are stranded up to the safe spot.

31 divers have been sent from the army special force to help the SEAL frogmen and foreign cave divers in the extraction mission.  It is currently planned that two divers will accompany each survivor for the tricky journey under water.

Open letter from His Majesty The King