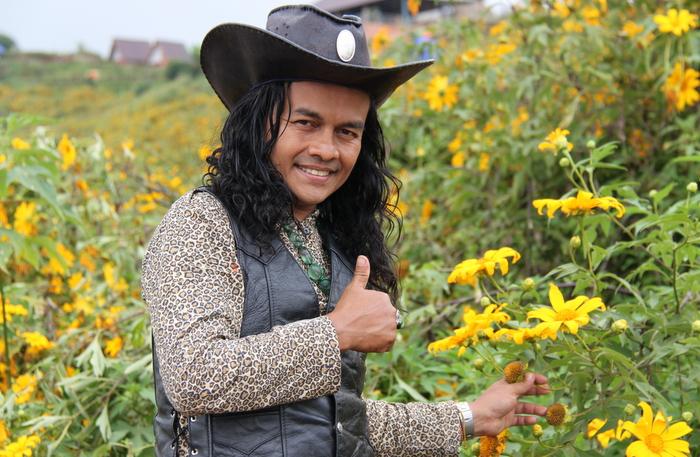 PHUKET: I first met the artist Watcharin Rodnit in 2007 when I went to prison in Phuket Town.

Perhaps I should explain that a little.

In fact, I visited the Phuket Youth and Child Penitentiary for an afternoon to write a story about a couple of artists who dedicated their time to teaching painting to young offenders behind bars, using their own money and resources to supply all the materials.

It was an inspirational experience to see such eccentric and colorful non-conformists bringing joy and hope to a group of young men who mainly came from broken homes. Many of them had also had serious drug problems.

The atmosphere during the teaching session was calm and collaborative. Halfway through the
afternoon, the artists produced an ice cream making machine to give the youngsters a little treat.

As Watcharin said at the time, “We saw the anger and hopelessness of these youngsters who no one cared for and who were shunned by society at large. We decided that teaching them art would be one small way of bringing at least one positive force into their sea of troubles.”

I developed a firm friendship with Watcharin, which evolved into my taking art lessons from him at his flamboyantly creative art studio ‘Rinda Magic Art’ on Yaowarat Road.

As I grew to know more about him, I realized what a remarkable journey his life had been and started to understand a little bit more about the soul of this exceptional Thai artist.

Watcharin grew up in Surat Thani. “[It was] a long, long way away from art, or indeed a long way from anything,” he says with his characteristically mischievous smile.

His father was a gardener and did a little sculpting as a hobby, but the main influence in Watcharin’s life was his grandmother, whom he called ‘mother’ and who used to take him for long walks into the surrounding forest, pointing out various fruits and plants about which she seemed to have an encyclopedic knowledge.

Watcharin was enchanted – the extreme passion for nature he developed frames much of his current artistic oeuvre. But it wasn’t always thus.

Like many artists, Watcharin went through his ‘bad boy’ phase, which he did in extremis while studying for his five year Bachelor of Arts degree at Silpakorn, Thailand’s premier arts university, in Bangkok.

“I probably hated Bangkok deep down and loathed being away from nature, so my art in those early days was a dark and deadly brew of trash and violence,” he says. “I wanted to use my painting to express the horror I felt inside for the urban wasteland I inhabited there.”

After a generalized search for his favored mode of artistic expression, Watcharin eventually settled on painting, particularly with oils, as his way forward. He enrolled for a Masters Degree after his Bachelors and then taught art for three years in Bangkok. But he says his soul was still troubled by the urban intensity of the city.

On a whim, he visited friends in Koh Phi Phi and fell in love with the natural splendor of Phang Nga Bay. In 2001, he decided to relocate to Phuket and at first occupied small shop spaces in Patong and Kata as his studio. It was very tough as paying customers for his work were almost nonexistent. He was on the verge of returning to Bangkok when he met his wife-to-be and fellow artist, Jayda.

Although very different in many respects, these two artists were able to blend their individual qualities into a harmony that portrays their thoughts on the greater issues of life. “Everyone can live together happily in this world if we understand and accept each other’s differences,” the couple say.

Jayda persuaded him to stay and they opened small restaurants in Nai Harn and Rawai near the Shell Museum, with Jayda cooking and Watcharin painting and teaching art to kids.

They finally moved to old Phuket Town in 2004 and founded the charmingly eccentric Rinda Magic Art studio, where Watcharin still paints. The space became a colorful meeting place for all sorts of artists and acolytes – full of laughter, strange objects, plants and various adopted pets such as soi dogs with purple dyed fur.

Watcharin had by this time experienced an artistic evolution and gradually discovered his signature style of swirling colorful depictions of nature, forests, plants, trees and fruits. He often goes off into the forest on his own to meditate on nature’s stunning bounty, then he paints en plein like the French Impressionists.

Monet and Chagall were certainly influences, but Watcharin says his is a very Thai interpretation of the mystical world of nature’s endless complexities and colors, which he represents in his highly detailed abstract expressionistic paintings, overloaded with exotic hues and textures.

Watcharin conducts art classes at the gallery for those interested in improving their painting techniques. It is a revelatory experience to drop in and talk to this inspirational artist while strolling around his veritable magical cave of art and handicrafts. Visitors are always welcome and will meet a creative soul whose art is magical and who exemplifies a true Buddhist perspective on modern life. You will come away with a renewed belief in the possibilities of human willpower and creativity to make the world a better and happier place.

You can visit Watcharin Rodnit at the Rinda Magic Art Gallery at 27, Yaowarat Road in Phuket Town, Tel: 089-289 8852 or email: info@rindamagicalart.com

Life of a ma song