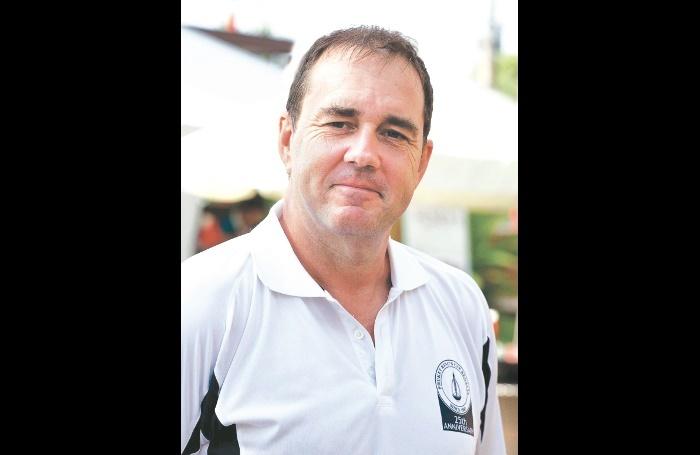 PHUKET: The yachts may change, the weather always, but one constant in the Phuket yacht racing firmament is Race Officer Simon James. Up at the crack of dawn and ready on the start line as the racers roll out their sails, Simon James has officiated at almost every regatta in the Andaman and the Gulf of Thailand since the turn of the century.

Despite his being a resident on the island, it’s rare to come across him when there isn’t a race in the offing. That’s because as popular as he is for his steadfast on-water management in Thailand, he is equally in demand on the start boats of regattas across Asia and Oceania.

“To be honest, these are the only times I’m in Thailand these days,” says Simon during our meet at the Phuket Yacht Club where he was prepping for the Multihull Regatta and getting organized for the Cape Panwa Hotel Phuket Raceweek.

Once he’s packed up at Raceweek, he’s back in the air. “The following week I’m in Hong Kong and China, then I’m off to the Hamilton Island Race Week in Australia. Back on August 29, then I go straight to the Asia Kiteboard Championships in China. Then a meeting for the China Cup, the Foiling Kiteboard Worlds, and after that I’ve got to go to the UK for an IRC meeting in Rourke. Then it’s straight back out to Asia for the China Coast, the China Cup and the Hainan race – they’re all back to back – then the Raja Muda (in Malaysia), then it’s the King’s Cup here in Phuket.

That final stop on the calendar, the King’s Cup, is where Simon first officiated at the start line, back in 2000, but his involvement dates back to his first months in Phuket in 1995, when he came to the island to set up the RYA sailing school.

Simon went to work for yacht charter operator Sunsail and encouraged the company to get more involved in events like the King’s Cup to better serve their client base. “We didn’t have a big budget for sponsorship but we (Sunsail) could provide products and support.”

That initial impetus from the island’s largest charter outfit at the time led to long-term benefits for the island’s top regatta. Today, the King’s Cup boasts a 25-30 strong charter boat class, with a further 30 yachts chartered to compete across a range of other classes, making the charter yachts a significant component of the fun and games at the regatta.

Simon’s involvement in regattas does not begin and end on the water. As representative for the UK’s Royal Ocean Racing Club and a World Sailing International Race Officer, he is committed to training a whole new generation of Asian race officers at regattas around the region, who he admits will ultimately replace him.

He is also focused on helping to develop new and exciting formats of racing for the regattas he works on. This includes current negotiations to bring an international kiteboarding event under the umbrella of the King’s Cup and a plan to deliver a whole new fleet of high-speed catamarans – the M32s – into the Asian circuit. These 32-foot cats have replaced monohulls for the world match racing series and Simon hopes to have them in a class of their own at the next King’s Cup.

“The plan is to bring a container load of 6-8 boats to the region,” he explains. “Basically the company ships them to an event and set up everything. Then the owners fly in, get on the boats and race them.”

Despite his globe-trotting lifestyle, he still happily calls Phuket home and is well aware that his success as a race officer began right here.

“As far as I’m concerned, this is a great stop-off point in between going places,” he says.