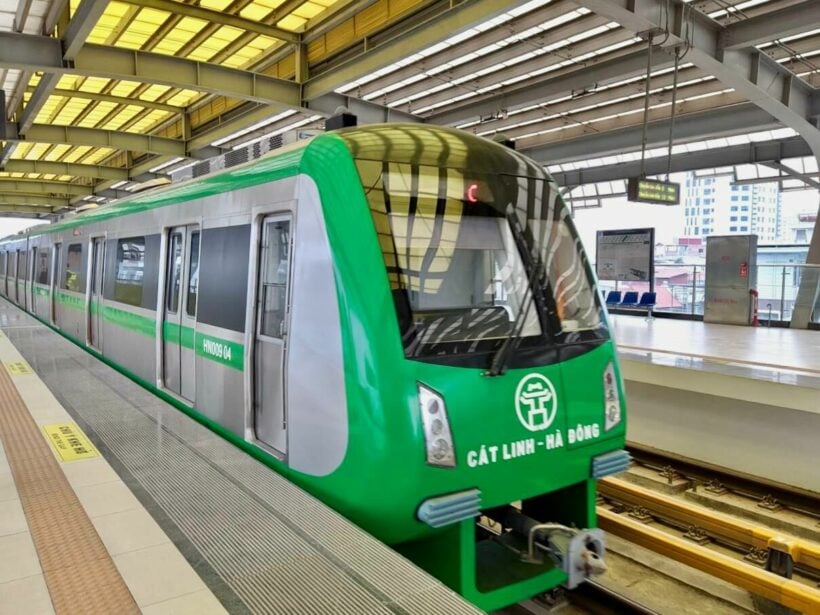 The Cát Linh-Ha Dong line of the Hanoi Metro, Vietnam’s first mass transit train service, which was launched on November 6 this year, is reportedly facing a public boycott for cooperating with China despite its initial excellent service and high expectations.

It came to attention as local media reported last month that the service is lacking passengers, at around 12,000 per day, or 60 people each journey, accounting for only 8% of the capacity, from the initial days of ticket sales during the service’s two-week free trial.

The elevated 13-kilometre route with 12 stations from north-central Hanoi to Yen Nghia bus station and Phu Long depot in Ha Dong’s southern suburbs takes roughly 24 minutes at speeds of up to 80 kilometre per hour and is calculated to be able to transport 1 million passengers daily with the purpose of relieving traffic congestion and minimizing the use of private vehicles in the capital.

The Hanoi city administration, which oversees the project, expressed their concern, especially as the metro line has been contentious, with many years of delays and cost overruns.

The project had a total initial investment of US$552.8 million and it took 10 years to finish it.

Given that this is just Vietnam’s second urban railway line after the Nhon-Hanoi line, which is currently under construction, the delays and cost overruns are attributed to the country’s lack of experience with such projects.

China, as a major financier of the project, exacerbated the issues since the placement of a Chinese oil rig on Vietnam’s continental shelf in 2014 was alleged to have delayed it, attempting to boycott the metro line as it was funded by China.

Yet the boycott calls are not universally supported and are emotional, one-sided, and needless, according to a Hanoi office worker who requested anonymity and told Voice of America in a report.

She said told VOA reporters that Japanese contractors would be a preferable choice for future projects.

“I care about the environment. I believe that individuals using public transportation will contribute significantly to lowering dust and noise pollution.”

HolyCowCm
I personally know as have quite a few Vietnam friends that they do not like the Chinese CCP what so ever being not at all and will never cower to them under any circumstance. Proud and brave people. I love…
joseph
China's Road and Belt Program is designed to create large debt to China. Cambodian ports, African ports and mineral rights, anything in Laos, etc. Malaysia as far as I know is the only country to say "NO". The US even…