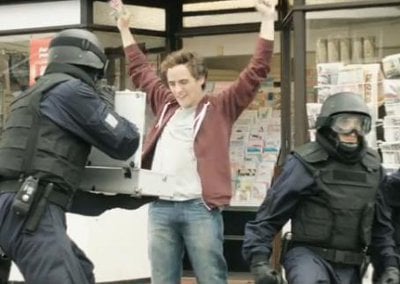 PHUKET: Daydreaming has been the noble art of little boys and girls around the world from time immemorial, and in honor of those dreams the Phuket Gazette‘s Weird World News roundup lands headlines of a helicopter delivery of about half a million baht for candy to the creation of the biggest Ferris wheel in the world, and for those who are almost teenagers – getting paid almost 2 trillion baht to marry a rumored lesbian.

THE British maker of Kit Kat chocolate bars have hijacked Willy Wonka’s famous golden wrapper idea with the introduction of the “We Will Find You” competition, which has hidden tracking devices in six of its candy bar wrappers.

The global positioning system chips placed in the “golden” wrappers will set-off an alarm in a Nestle “secret control room”. The company will then “scramble a crack team of highly trained individuals” and a helicopter to locate the individual and give them a briefcase with UK£10,000 (about 500,000 baht), reported United Press International.

The embedded chips will be placed in wrappers of the regular four-finger Kit Kat chocolate bars, as well as the Kit Kat Chunky, Aero Peppermint Medium and Yorkie Milk bars, the company said.

Rolling out the biggest Ferris wheel

BIGGER, better playthings have been the key to many a young boy’s – and man’s – daydreams and now the Mayor of New York, New York, has announced plans to build the world’s largest Ferris wheel, reported United Press International.

Originally designed for the 1933 World Fair in Chicago as a way for the US to thumb its nose at France’s Eiffel Tower, the Ferris wheel has become a standard at festivals and fairs throughout the world.

Mayor Michael Bloomberg’s Ferris wheel, which is expected to be completed at a height of 190.5 meters by the end of 2015, would top the current world record holder, a 164.9m wheel in Singapore.

Bloomberg said the more than 7-billion-baht project will be part of a retail and hotel complex designed to bring over 15-billion-baht in private investment to Staten Island, reported the Staten Island Advance.

“Our administration has made major investments all along the North Shore of Staten Island, because we know this area is full of potential for economic growth,” Bloomberg said. “But this newest plan is the most exciting of all – it’s a once-in-a-generation opportunity for economic development.”

WITH such a substantial amount for a dowry, Hong Kong billionaire Cecil Chao Sze-tsung may have trouble separating the knights in shining armor from ne’er-do-well serfs.

Mr Chao is trying to marry off his “possibly” lesbian daughter for the princely sum of $64mn. The princess in question is Gigi Chao who, according to the Chinese media, last week married her girlfriend Sean Eav in Paris.

Mr Chao proposed the offer as he loves his daughter very much, CNN reported.

He also poured cold water on the civil ceremony marriage saying, “It was only rumor.”

For many a budding teenager, such an opportunity might seem like a dream come true, but the reality, if the rumors are true, might leave the poor lover with a cold bed.

However, potential husbands could be from anywhere, regardless of nationality or economic background, Mr Chao said.

The only requirement being that he “loves my daughter and she loves him.”

Ms (or Mrs) Chao said of the offer: “It was quite entertaining.”

Asked if it could lead to harmony, she replied, “We will see.”

Obese abbot breaks all the rules