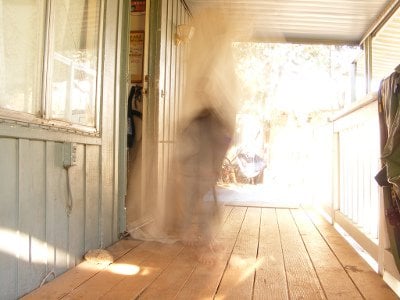 PHUKET: A man in Ayutthaya claims he discovered the gruesome body of his own recently murdered mother after her ghost came back to tell him what had happened to her.

The body of Mrs Sukkhapha, 56, (full name not reported) was discovered in a field on July 31. She had been sexually mutilated.

Mrs Sukkhapha’s remains were found in a state of advanced decomposition around 300 meters from the road in Ayutthaya’s Nakhon Luang District.

Mrs Sukkhapha’s son Mr Chaiyo, 27, tearfully told a reporter he worked as a construction contractor and lived with his wife and mother.

His mother went back and forth between his house and that of Mr Dam, her new husband, Mr Chaiyo explained.

He alleged that Mr Dam drank heavily and beat his mother often.

Mr Chaiyo said he had tried to persuade his mother to leave Mr Dam, but she refused.

Before she died, Mrs Sukkhapha told her son that she was going to Bangkok to help with a wedding. That was the last he saw of her.

Mr Chaiyo tried to find out where she was, but none of her friends had seen her.

When he went to Mr Dam’s house, the place was locked and no one was home. He assumed his mother had gone somewhere with her husband.

“In the middle of last night, I saw the black shadow of a woman standing next to one of the house pillars,” Mr Chaiyo said.

“It was like she had come to say something, but couldn’t speak. I thought something bad must have certainly happened.”

Mr Chaiyo said the next morning he went looking for his mother, finding her body in the field.

Police have confirmed that Mr Dam has since disappeared with his two children. Before he left, he sold his cellphone to a neighbor.

Police are continuing their search for Mr Dam.