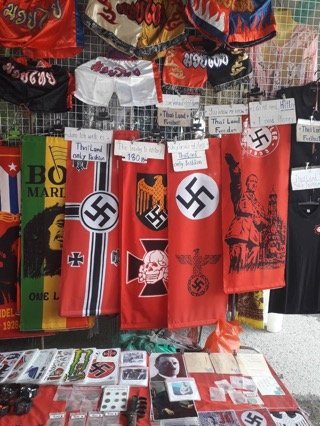 A French tourist has raised concerns about the sale of Nazi paraphernalia in Pattaya.

PattayaOne.news reports that 34 year old Alexandre Jandaeng spoke of his shock at seeing the goods, which included pictures of Adolf Hitler, swastika emblazoned scarves and coins, on sale at a market in the popular resort town. Mr Jandaeng reported the sale of the goods to Pattaya Tourist Police, telling them that if such things were on sale in his native France, the person selling them could face up to 10 years in jail.

A video posted by Manager showed Mr Jandaeng at the police station showing pictures of the goods to an officer. In the video, the Frenchman explained how he did not like to see such things and that Nazi related goods should not be allowed to be sold in Thailand or anywhere else.

“For me, it is very very important the police stop this”, Mr Jandaeng said in the video.

“It is important to remember history”, he said.

“Many people died for that and for me it is impossible to see this and is very shocking. I don’t like,” he added.

Mr Jandaeng praised the tourist police officer for listening to his complaint but admitted that he does not know if any action will be taken against the vendor who was selling the Nazi goods.

This isn’t the first time Nazi imagery or so called “Hitler-chic” has been seen in Thailand. As well as being found on sale in some of Thailand’s most popular night markets, Nazi imagery has even been featured some of the countries leading educational institutions and in government videos.

In 2011 a Catholic school in Thailand was forced to apologise after it made students wear Nazi uniform for a sports day parade. Some students also had swastikas painted on their faces.