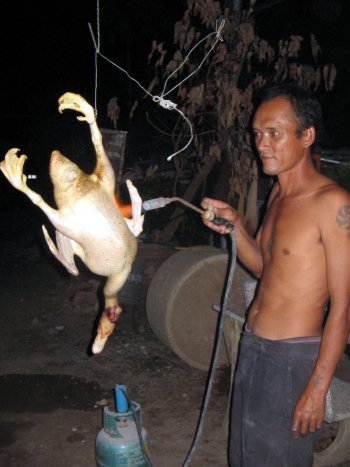 PHUKET: Diners at the popular P Pizza House restaurant in the Samkong area of Phuket Town got a fright recently when a man in an adjacent lot fired up a blowtorch and began searing the flesh of what appeared to be a strange new creature with enormous front claws.

Closer inspection revealed that the animal was in fact a goose the man had caught and killed, then suspended upside down with wire.

The surprised diners had initially confused its rump and anus for a one-eyed head and its thin neck for a tail. Its webbed feet, curled up under the effect of rigor mortis, were mistaken as claws.

P Pizza serves tasty Italian and Thai cuisine – but goose is not on the menu.