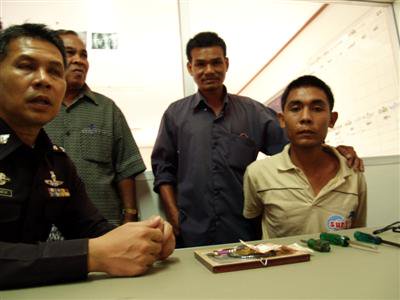 NAKHON SRI THAMMARAT: In most professions, apart from those involving heavy machinery or driving perhaps, falling asleep on the job will earn you a strict telling off, a warning letter or in the worst case, the sack.

In the burglary trade, however, sleeping on the job can have somewhat more serious consequences as one young army deserter in Phraphrom District discovered March 27.

Pvt Chanchai Phanrak, 25, who a few days earlier had deserted his unit at their base in Chonburi, was found fast asleep in bed by Chaiwat Phensawat, 22, the son of the owner of the house he was robbing in Village 6 Tambon Naphru.

K. Chaiwat was on his way to the bathroom, when he noticed a strange man sleeping on his sister’s bed – his sister was staying with a relative at the time – and her possessions scattered around the room.

Chaiwat crept in for a closer look to make sure the man really was a stranger and then called his father, Prawet Phensawat, 46.

The pair grabbed the sleeping stranger, tied him up and waited for the police.

Police soon arrived to arrest the sleepy trespasser. Police said that Pvt Chanchai confessed that six days before his fateful nap, he had requested a day’s leave from his base in Chonburi and then fled back to the South where he was from.

He also confessed that at the time of his desertion, he had only just been released from military prison where he had been incarcerated on charges of theft.

“Before the incident, I’d been visiting a relative in Maharaj Hospital [in Nakhon Sri Thammarat City]. I then wandered around aimlessly until it was nearly dawn when I came across a house with a window open.

I decided to sneak in and rob the house. When I got into the room, however, I found that the bed was very soft and comfortable. I thought I’d just lie down and shut my eyes for a moment and then make my escape with the things I had stolen. But because I was so tired, I fell fast asleep. The next thing I knew the occupants of the house had me pinned down,” Pvt Chanchai lamented.

Lt Col Wutiphong Titisroj, Deputy Superintendent of Phraphrom Police Station, said that Pvt Chanchai had committed at least 10 burglaries and his commanding officer would be notified of his arrest so he could be prosecuted.